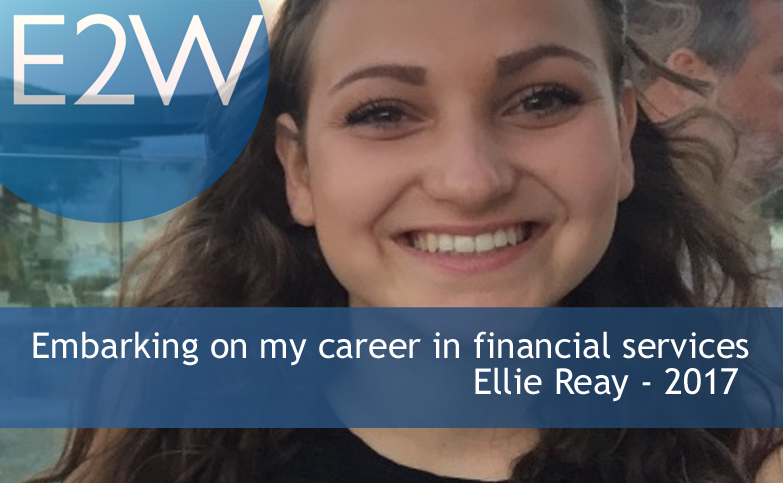 Embarking on my career in financial services - Ellie Reay 2017

Next year is the 100th anniversary of women securing the right to vote in the UK. As part of celebrating the centenary, we are producing a history of women’s careers in financial services over the years. In the latest in the series we meet Ellie who has just completed an internship at Barclays.

Despite financial services not being an industry I intentionally pursued, I was fortunate enough to secure a place on the Barclays’ HR internship scheme in London this summer. Before joining I had many preconceptions of what the industry would be like: long hours, extremely fast paced, and heavily male dominated. Although some of these did hold true – the pace is impressive – at no point did I notice women were in the minority or given different roles to men.

I would say some of this may be due to my particular department: I strangely found myself working on a very female dominated floor in the supposed male world. However, it was obvious Barclays were actively trying to reduce the disparities in gender representation, especially in their investment bank.

As a female, I did not feel disadvantaged when applying and had the opportunity to attend female only events which gave me a better insight into the industry. It was also really promising to see the bank introducing schemes to get female talent into more senior roles, an area where admittedly less progress has been made. They were also rolling out schemes to help women re-enter the workplace, often after taking a career break to have children.

I also witnessed the impressive work that Barclays were doing to support the next generation of men – paternity leave, flexible working, unconscious bias training etc. to ensure they understand and benefit from a more gender equal business and society.

Of course, gender was not the only diversity and inclusion stream - LGBTQ, ethnic and social diversity were also high on the agenda.

After reading Betty and Shelia’s experiences of the sector in the 1950s, I’m encouraged by the strikingly different environment I was lucky enough to experience in 2017. Although work is by no means complete and there is still a large gender pay gap in the sector, I feel there has been a culture shift. Overall, women are being given the same development opportunities as men and I believe, even in the more male dominated areas of the bank, the female voice is valued and heard.

I am now truly excited to be joining a firm and an industry next year where women are valued, supported and the remaining barriers to gender parity are being removed. It is now up-to all of us to ensure that we fulfil our potential and ambitions as people.