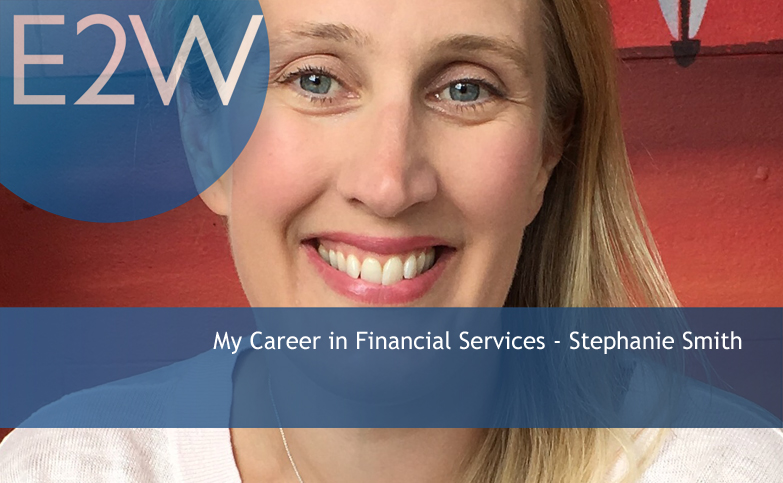 Next year is the 100th anniversary of women securing the right to vote in the UK. As part of celebrating the centenary, we are producing a history of women’s careers in financial services over the years. In the latest in the series we meet Stephanie.

E2W member, Stephanie Smith’s career started in consulting and then quickly moved into HR, a department she is passionate about thanks to her strong belief that people can make a real commercial difference to a business.   And no, by that she doesn’t just mean attracting the highest performers; she explains that you need your employees to ‘work’ for you in every sense of the word and you really need to heed the hygiene factors.  In Stephanie’s opinion, to yield the best return on your investment in your employees you need to connect with them, encourage them, train them, respect them and literally, work with them.

At HSBC, Stephanie was a global manager in their Rewards department, working closely with its investment banking technology division and when it was the ‘compensation and benefits’ time of year she would go through the numbers with a fine-toothed comb.

Stephanie became recognised for her analytical approach, challenging senior managers on their reward numbers:  Stephanie would be enquiring what they were trying to achieve by awarding £x to a manager whilst their seniors would be trying to explain the rationale.

Stephanie’s questioning approach & reputation for collaboration at HSBC lead her to be asked to leave HR and move into the investment banking technology division - the type of career move that you don’t see every day - ultimately working as the COO of Risk Strategy at HSBC.

Despite being a completely different department, Stephanie continued to approach her role in the same detail-orientated manner; she still had to ensure that project deadlines were met or managed appropriately, that budgets were scrutinised and realistically presented and also, that her people were still working effectively.

Whilst performing this demanding role, Stephanie continued with the ‘value add’ to her team and beyond: mentoring other women in the workplace, connecting with her team so that she could learn more about what made them tick, what issues they had on their desks and collaborating with them to help resolve those issues, but also so that they could realise their potential.

Just as a business analyst is the bridge between the business and technology, Stephanie went to work as COO of Risk Strategy with a side line as an HR analyst, putting her HR expertise and innate understanding of how to extract the best from people, to work for the business.