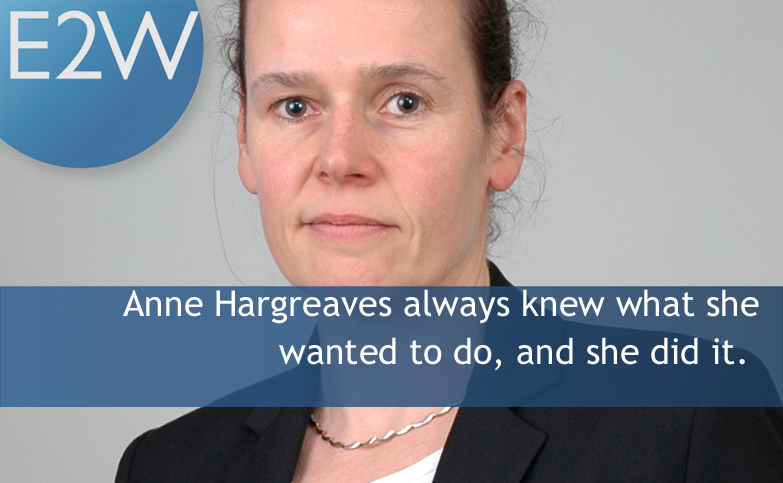 Anne Hargreaves always knew what she wanted to do, and she did it.

As part of our Vote100 series on women’s careers, Anne Hargreaves walks us through her successful career in Technology at some of the leading investment banks, shares her views on women in this sector and explains how so many of the skills learnt are transferable.

Unlike many people, after reading maths and chemistry at university, I knew exactly what I wanted to do – computing and technology. And thanks to that drive, I’ve enjoyed a rich and varied career to date working for many of the top investment banks.

After leaving university I spent about 6 years at Logica: not an investment bank but I look back on it as almost an apprenticeship as this is where I started to code. From there I went to Paribas as a technical lead and I started to build my knowledge of finance as well as my way around Paris!

Paribas was taken over by BNP as you might know and as with many takeovers, the culture changed. I decided to leave and around 1999/2000 and started at Goldman Sachs where I stayed for the next 15 years or so.

Most of my time at GS was within Operations Technology and my first experience of the firm was in the asset management division, GSAM. Operations within GSAM at the time was still quite manual and I was lucky enough to work on a project to automate many of their functions including trade processing and reconciliations. It was a great feeling to help the operations team remove manual processes and reduce risk – we felt quite lauded.

I went onto work on big data projects and then to manage a Compliance Technology team. This involved working on restricted trading lists, an area which was becoming increasingly important during the ‘00s. And from there I worked in ‘X-Div’: as the name suggests a cross divisional technology group that dealt with much larger, complicated projects such as regulatory changes and the setup of new legal entities.

I really enjoyed my time at GS but left in 2014 to work as a contractor, allowing me to pick significant project deliveries at Barclays, Credit Suisse and Deutsche covering the likes of settlement, real time liquidity monitoring and MiFID II.

I’ve had a great career so far, really enjoy what I do and, as a woman in Technology, I’ve always been treated fairly. It’s disappointing, though, that women continue to be under-represented in this area. In a recent role, I was one of three women in a department of 30! As a result, my communication style has changed, I’ve noticed, over the years and has become more ‘masculine’ - I’m much more direct now for example. That hasn’t always worked for me though as men don’t expect women to communicate like that – I’ve been told that I’m too assertive by male managers in the past.

I try to promote women into Technology as much as possible in the course of my normal day to day work and I’ve returned to my university to promote technology in the city as a career choice. I was a member of the ‘Women’s Network’ at some of my employers but, while I do believe these networks achieve many helpful goals, and provide a support network, I sometimes felt as though membership was regarded primarily as a good career strategy, and this made me feel somewhat uncomfortable.

For women to progress, in my opinion, these groups must be authentic and engage with both men and women to solve the root causes of women’s under-representation in the technology industry. I also believe that building a pipeline of new female talent will be key to achieving full equality.

I’m currently on sabbatical, enjoying working in the voluntary sector where I am learning new skills in animal psychology and welfare and also how to create a three-course meal for 40 people using only supermarket rejects! I have found that my core skills such as teamwork, leadership and planning translate very well to this new environment, and I feel privileged to be able to give something back to my community.

Share Your Story
E2W is publishing the stories of women who have been working in financial services to celebrate this year’s 100 year anniversary of women securing the vote. We have two themes – “My Career…..” and  “My Contribution….”

My Career
What was it like to start a career during the swinging 60’s? Were you on a three-day week in the 1970’s? How did you fair in the yuppie loads-of-money 80’s? How politically correct were the 90’s? Did you experience the start of the digital revolution of the 00’s? Or perhaps you embarked on your career recently - has the industry lived up to, or surpassed, your expectations?

My Contribution
“My contribution to …” showcases our members’ and followers’ achievements.  Have you contributed successfully to a major project or initiative within financial services that you’d like to share with E2W and its supporters?