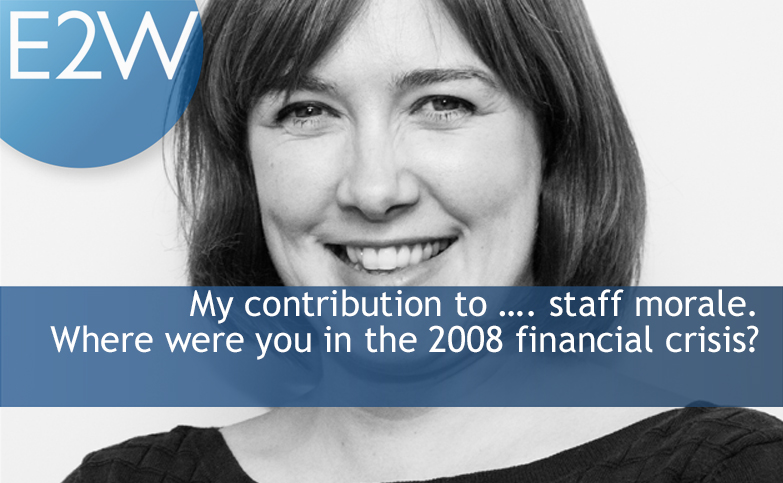 My contribution to …. staff morale.  Where were you in the 2008 financial crisis?

As part of our Vote100 series on women’s careers, Caroline Kings tells us about her contribution to …. staff morale and asks where were you in the 2008 financial crisis?

In the 2008 financial crisis, Caroline Kings was working for Goldman Sachs.  Working long hours, she and the team needed a morale boost and found it in an unlikely place!

In September this year it’s ten years since the financial crash of 2008, when Lehman Brothers collapsed, numerous mergers occured and the financial services sector was in turmoil.  Has the UK economy ever really recovered?  That’s not a question for me to answer but we certainly felt the repercussions for a great many years.

I was working at Goldman Sachs at the time in their Funding Operations team.  It was a great department to be a part of – we optimised excess cash and securities positions, making them ‘work’ for the bank.  It was fast paced, interesting and innovative, interacting with a really wide range of departments from other Ops teams to traders to senior management.  I worked with, & managed fantastic people too – intelligent, creative, hard working.  We certainly worked hard but we were rewarded with team spirit, opportunities and ultimately a job in arguably the number one investment bank at the time.

I remember hearing the first murmurings of financial disquiet in the May of 2008.  My fellow manager and I were off to see Madonna in concert that night and on leaving work, we knew we couldn’t have too late a night!

Come the September, GS was prepared but I don’t think any bank was prepared enough as events unfolded.  My team and I were working very long hours throughout the week and weekends: t was really hard to ask people to come in on Saturdays and Sundays; and it wasn’t as if they could saunter in after a lie-in - we needed them in at the crack of dawn and often we were staying until late into the evening or the early hours.

At the same time as all of this was going on, the Ryder Cup was taking place.  The Ryder Cup is a professional golfing tournament that happens every two years between USA and Europe and it is fiercely competitive.  The players are fired up and quite often so are the fans – my partner and some friends were out watching the golf and enjoying their Saturday night.

As we liaised with our colleagues in the New York office during those long hours, I started to circulate the scores via email to known golf afficionados.  As each player or pairing of players wins, they score a point; if they draw, they score half a point and so it’s very easy to follow.

It was a very simple thing to do and on that Saturday of the Ryder Cup, Europe were doing well.  My colleagues didn’t necessarily need a morale boost as we all knew what we had to do but circulating the score just helped to keep us all going and feel a part of something that we were missing out on.

Europe lost the Ryder Cup; Goldman Sachs survived the crash and I was promoted to executive director.  Those long nights and morale boosting had paid off.

Read other stories in the series

E2W can help you take a step back and revel in your achievements.

This year, we’re celebrating the 100 year anniversary of women securing the right to vote by showcasing what women in financial services have achieved over this century in time.

Thanks to this series of articles, we’ve brought you stories of times gone by such as Sheila Buckingham’s and Betty Warde’s memories as well as more recent articles on women in finance today:  Suki Notay, Yvonne Kurankye and Anne Hargreaves to name a few.

Many of our Vote100 story tellers have found it a revelation to recount their careers, stand back and see what they have achieved – a narrative of their CV.  Thanks to the E2W platform and audience, these women’s peers, seniors, mentors and perhaps even future employers can read about how they have overcome challenges, chosen their career moves and in some cases, successfully managed career breaks.

What achievements are you proud of?  Tell us what you’ve done!  In this very special year marking women’s progress, stand up and be counted - share your story with E2W and our supporters.