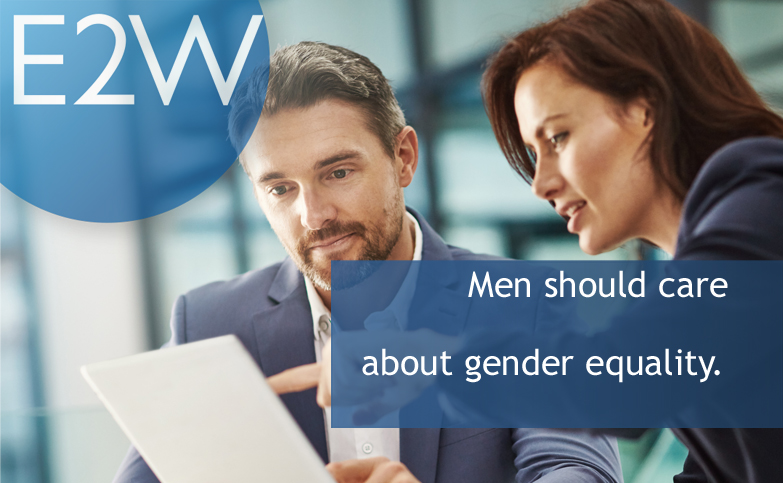 Men should care about gender equality.

Last week’s post began by referencing Jayne-Anne Gahdia’s views that the ‘brotherhood’ and the ‘old-boys network’ are prominent factors in holding women back in business. So, what about the men? Why should gender diversity matter, and how can everyone contribute in the move toward gender equality?

There are obvious benefits to having a more gender balanced company – they tend to perform better, a clear advantage for all involved! There are a multitude of others: improved reputation; lower employee turnover rates; stronger engagement and improved performance.

But there’s the one reason I feel that we forget to mention. Everyone should care about gender equality because it is right. It is right that opportunities and positions are open to all, and to create a culture that fosters inclusion.

Too often the goal of ‘gender equality’ is looked at through a ‘win-lose’ frame: if women are granted increased opportunities, surely men have something to lose. Not only is this wrong, it helps to stall progress in moving towards equality.

There are specific benefits for men as a result of gender diversity and progressive changes. Companies are starting to offer increased paternal leave, aiming to balance childcare responsibilities, and with the hope of leading to a culture where men can have a better work-life balance. Countries where paternal leave is becoming more the norm (e.g. Norway) have seen male participation at home triple. Overall, this leads to far healthier work-life balances for men and women – and usually leads to increased job satisfaction and productivity at work.

Moreover, in 2017 gender equality is starting be something people expect -customers expect it, and so do employees.

So, gentlemen, let’s do this together. Men are vital to the fight –the research shows that your support is key in creating gender diversity in the workplace! Now is the best time to really start making progress – the media, the government and the public (men and women) are on board.

Let’s not let this opportunity pass us by, here are just some ideas that men could do over the next six months to promote and foster gender equality:

1. Speak up about priorities – address the work-home balance
2. If you have paternal leave – take it!
3. Encourage others to take their parental leave
4. Pay attention to language – avoid double standards or overtly gendered words
5. Mentor a female employee – having a role model is often crucial for moving forward, and mentor and mentee often learn from each other
6. Be a voice that speaks up for diversity
7. Think about the recruitment process – are there aspects that need changing?