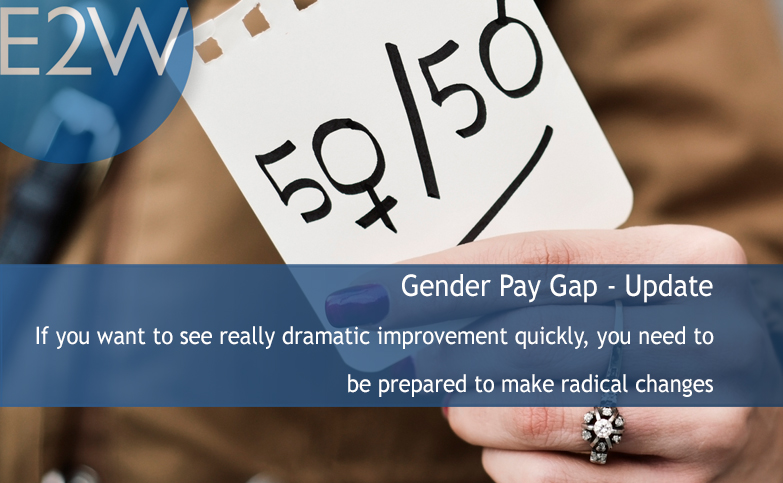 The last week has seen excitement grow in the broadsheets and some of the financial press, as well as here at E2W about the up and coming second year of reporting of the gender pay gap data.  Unfortunately, despite the coverage of gender pay gap figures for April 2017 reported in 2018, the naming and shaming of those with the largest pay gaps and the commitments to change from the City, the news so far this year is extremely disappointing and in some cases, the figures are worse.

To note:
At E2W we are concentrating on the percentage of women top quartile earners; most institutions recognise that the gap is a consequence of a lack of women in the top quartile earning bracket, the more women at the top, the smaller the gap will be. 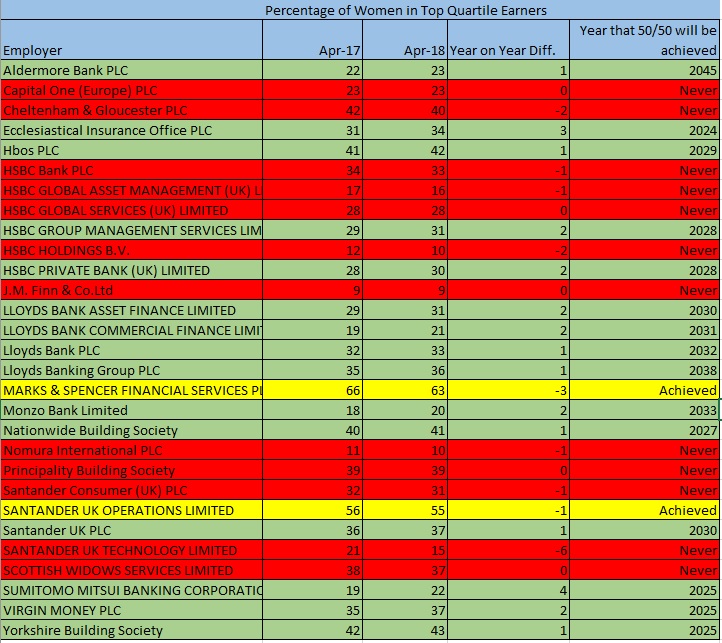 It’s hard to give a complete, overall picture as some of the larger institutions, such as HSBC, have many subsidiaries which are each treated separately.

Some firms had been talking about 50/50 by 2020 which, may I remind you, is now only next year.  It’s a real shame that the statistics for top quartile earners show that almost half the firms that have currently reported are actually employing fewer women in senior roles in April 2018 than they were in April 2017.  Of those that have made advances, it seems that at the current rate, 50/50 in these firms will not be reached until the 2030’s. Add in those firms that have moved backwards and 50/50 becomes nothing more than fiction.

HSBC Private Bank does have 2% more women as top quartile earners in 2019 whereas their asset management, bank and holdings’ arms have all lost women at the top.  Likewise, Santander is a mixed bag – in some areas they have improved; in others they’ve deteriorated.  And that’s the problem.  The focus on the issue, everyone agreeing that it’s a problem that needs to be fixed thanks to the benefits gender diversity brings, why are we seeing the percentage at the top dropping?

“Firms are blaming the lack of women in senior management,” according to Becky Pritchard of Financial News which is, frankly, spot on and one of the main causes of the gaps.  This is something that we point out to them time and time again, encouraging them to change, fundamentally, their cultures and recruitment practices.  As Yasmine Chinwala, a partner at think tank New Financial, said to Becky Pritchard, “If you want to see really dramatic improvement quickly, you need to be prepared to make radical changes and I have not seen any companies doing that yet. I think financial services companies are quite risk averse and quite conservative".

We have seen some companies making changes many of E2W’s clients have had radical re-thinks of their recruitment practices.  We also appreciate that there’s a lot going on and the Brexit plans for the City can’t be helping but there’s always movement ‘at the top’ and these roles could be filled by women.  You just need to look harder.

A worrying trend is where firms are claiming progress against their opaque Women in Finance Charter targets whilst their transparent gender pay gap reports do not support the claims.  There is an awful lot of lip service paid to this issue when really the City needs to be putting its money where its mouth is.

On the other side of the coin, praise where praise is due. There are firms that are making progress: Sumitomo are currently leading the way.  They are employing 4% more women in top quartile earning roles than they were in 2017 and are current ‘leaders’ with the biggest improvement.

Overall, the stats do not bode well for the rest of the industry ahead of the deadline in April, which means that our mission continues.  No doubt these initial gender pay gap figures will be a topic for discussion when we meet with Nicky Morgan MP on 22 January.  What would you ask the government to do?