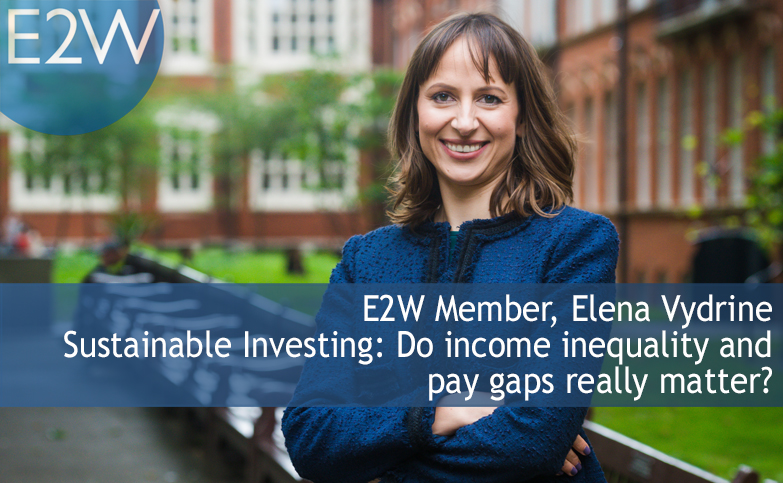 Man Group are kindly hosting an E2W event on the 2nd of December around the theme of Resposible Investing. Elena Vydrine, a member of E2W, will be publishing a series of blogs in the run up to the event on the topic of ESG. If you would like to sign up to attend this event, please register your details here. You can also read Elena Vydrine's previous blogs on "What is responsible investing?" and Tobacco, sustainable lifestyle and ethical investing. What’s the link?

Elena Vydrine is a Head of Portfolio Management and ESG Integration at Ryedale, a company developing portfolio management software with integrated ESG factors. Over the last 12 years, Elena has worked in the asset management industry specialising in passive equity funds that track financial indices and alternative indexation like smart beta and ESG. Previously involved in Responsible Finance project in the capacity of Research Associate at HSBC Asset Management.

Pay gaps, income inequality and the availability of ‘decent work’ are frequently cited in the media and have become a hot topic from an ethics, social justice and public equity perspective. But, besides equity and fairness, should investors care?

New evidence has emerged that its effects on society are multiple and range from health and social mobility problems, poverty, political instability, violence and conflict to a negative environmental impact. This is undoubtedly a business issue. Economists have evidence that inequalities present a material systemic risk to investors by hampering economic growth, social cohesion and financial stability.

For instance, the New Economics Foundation think-tank estimated that a reduction of 1% in the national income share attributed to wages reduces UK GDP by 0.13%, stipulating that the growth in national income is driven by growing wages more than by growing company profits. Consequently, while wage reduction may be treated by companies as a cost-saving, its effect on consumption effectively leads to a shrinking market. In fact, in-country income inequality over the last 30 years has cumulatively cost almost 9% of growth in OECD countries

Where are we at with income inequality?

Pay gap ratios are most commonly analysed as the difference between the top workers' salaries and the average. It is one of the most quantifiable indicators associated with firm-level income inequality and it has been linked to corporate financial performance.

The debate over pay disparities between the highest and lowest earners has recently gained much attention. But it is nothing new. Back in 400BC Plato recommended that the pay of the wealthiest should never exceed a multiple of five of that of the poorest.  A multiple of 20:1 was recommended by the British governmental Hutton Review on fair pay (2011) while Mondragon, a successful Spanish cooperative often depicted as a leading example of human resource organisational excellence, has a pay ratio of 9:1.

Growing executive pay can be attributed in part to globalisation and an increase in company size and complexity. A scarcity of talent increases the price of executives, as well as improving their pay-negotiating position. On the other hand, poorly constructed and complex long-term incentive plans (LTIPs) for performance-related pay, reinforced by a lack of independence among remuneration consultants or committees, weak boards and a lack of engagement on these issues by shareholders, all contribute to a ratcheting up of excessive rewards.

Evidence is emerging from academics and professional bodies that excessive levels of CEO compensation are misaligned with value creation. Disparities in workforce pay levels are a growing cause of concern from a regulatory perspective.

Developments in the fair pay agenda in the UK are influenced by and developed in tandem with increased reporting requirements in various geographical jurisdictions. For example, the US Dodd-Frank Act, Section 953(b), mandated from 2018 onwards that companies should disclose their executive pay ratio. India has required similar disclosures since 2013. Switzerland voted against a 1:12 CEO pay ratio in a 2013 referendum but the proposal gathered significant support from 34% of the population.

Gender pay gap reporting is now mandatory in the UK. There is also a growing body of evidence on gender diversity, ethnic and cultural diversity, and corporate culture as well as executive pay.

In 2018 the UK launched an enquiry on fair pay, voicing concerns about the magnitude of executive pay and its disconnection from ordinary working people’s pay as well as the consequences on underlying long-term company performance. As a result of the enquiry, a legislation was introduced on executive pay vis-à-vis workforce pay levels. From 2019 onwards companies will be required to disclose pay gaps so that the government can measure and understand the drivers behind growing firm-level pay disparities.

The Financial Reporting Council (FRC) has placed an ever-growing emphasis on pay fairness, the disclosure of remuneration incentives and the need for long-term alignment with the underlying value of the company.

In its 2018 revision of the Corporate Governance Code, the FRC placed more emphasis on the workforce as an underrepresented stakeholder in the ‘maximising shareholder value’ equation. This represents a tangible shift in sentiment towards company purpose, culture and diversity.

In the latest (October 2019) substantial and ambitious update of the UK Stewardship Code, the FRC also raises expectations for how money is invested on behalf of UK savers. The updated code places more emphasis on the creation of long-term value for a wide range of stakeholders, including society and the environment. Diversity, remuneration and workforce interests should be considered as part of the Stewardship Code Principles and as part of the materially significant factors of ESG (Environmental, Social and Governance). Even though the effectiveness of this code is criticised due to its weak enforcement, it sends a clear message.

What is the business impact of income inequality?

Capped pay gap ratio proponents argue that high wage disparities undermine teamwork, employee morale, trust and satisfaction and lead to industrial disputes, sick days and a higher staff turnover (see Drucker, High Pay Centre, Hutton Review). Conversely, when pay gaps are lower the effect on productivity is positive. While there is a strong moral argument for fair pay, there is, in fact, also an economic and business case for more equal pay.

Furthermore, evidence has emerged that rewards for executives should not just be aligned with performance but should also incorporate sustainability targets material to the business (Carr, 2018). Based on the above, the executive pay ratio is beginning to be considered as an additional indicator in financial analysis.

The findings of my two-year research project at the University of Cambridge confirm that pay ratios are indeed related to company performance.

In the ten years (2006-2016) of the pay ratio data sample calculated from the FTSE350 index, a negative relation between pay ratios and operating margins was found to be statistically significant. As pay gaps rise, the operating margins of the companies decrease.

Based on academic research into human capital, practices that invest in and motivate workforces may translate into higher company performance, as well as macroeconomic and social improvements. Polarising theories explore the drivers behind wage disparities and whether fairness or high incentives at the top are a motivation to drive labour productivity and company earnings. While pay levels constitute a hygiene factor, and may not reveal the full picture of the human capital potential or may not influence workers' productivity on their own, they are likely to be correlated with factors that do. Evidence also exists that if the pay gap is perceived as unfair, it may cause dissatisfaction and undermine workforce productivity.

It is therefore reasonable to conclude that pay ratios have an impact on corporate performance. It is also evident that large wage disparities may not lead to better financial performance and may, in fact, be detrimental.

By looking at the challenges of income inequality through the lens of investment risks and opportunities it is clear that inclusive growth benefiting all members of society is vital for both ethical and financial reasons. Systemic issues of social cohesion, financial stability and economic growth mean investors’ interests are deeply intertwined with long-term sustainable outcomes for the economy and wider society.

Public concerns about high pay gaps are not unfounded. Insights from this research are of value to investors who seek to incorporate ESG into their investment process and are particularly relevant in the light of emerging regulatory pay gap disclosures in the UK and beyond.

Wage-setting is an area where the private sector has influence and can make a positive impact. Inequality can be influenced through practices in hiring that enable, among other things, social mobility, taxation strategies and responsible marketing as well as wage inequality.

As a result of the emerging understanding of the impact of income inequality on businesses and the economy, an increasing number of investment institutions are assessing the significance of the economic implications posed by the social dimension of the ESG and are devising strategies directly or indirectly targeting income inequality.

All of the above is evidence that there is a business opportunity to address issues of income inequality while investing in profitable and ethical companies.

If you found this interesting and would like to find out more about whether the financial industry can do well by doing good, please register here for your space at our upcoming event.