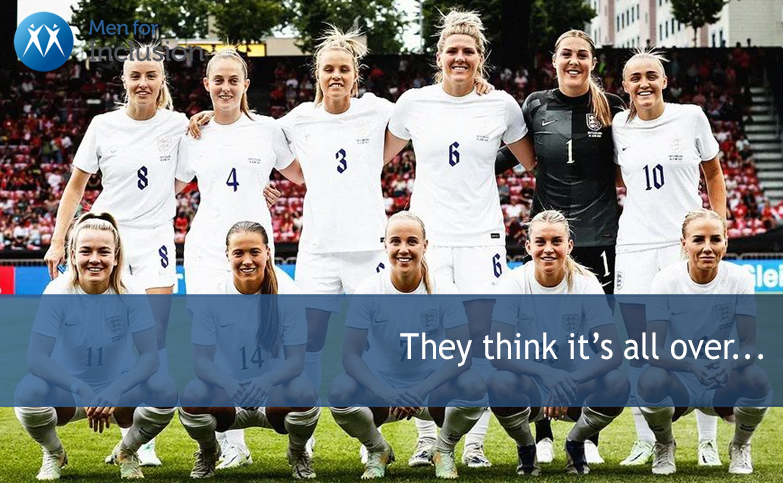 They think it’s all over…

England are playing Spain in the quarter finals of the Euro’s. I wish them all the best and will be supporting them all the way. You can do this!

'They think it’s all over' is one of the most famous sporting commentaries sayings. In 1966 the 1921 The Football Association ban on women playing football in football league grounds was still in force. The ban had been put in place as the women’s game was becoming too popular and was seen as a threat to the men’s game. The women’s football association was not formed until 1969 and in 1971 the ban was lifted. With larger audiences, investment and professionalism, the women’s game has progressed incredibly over the last few years. For many including myself, it is in many respects more watchable than the men’s game.

But we should ask ourselves, how much did excluding women from so many sports cost our society and economy? No role models, no aspirations, no benefits of popular team sports. How often did/do we hear girls can’t kick balls or understand the offside rule and what effect did this all have – on boys and girls (men and women) and on our relationships as equals?

There are some analogies, bear with me, with workplace gender diversity. Diversity in many respects excluded men, like women footballers had been. When men were included, it was to be told we were ‘biased’ (unconsciously) or ‘(micro) aggressive’ or we don’t understand…

All the investment in time and money has been channelled towards supporting attracting, retaining and developing women in the workplace, just like we did with men’s football. Recent studies have shown that men are increasingly resistant to D&I initiatives – is this the effect we wanted?

To reach the point where we can say 'it’s all over' we need to attract, retain and develop men to become active participants in workplace inclusion. To become skilled and active Inclusionist. At current rates of progress ‘it will not be all over in my life time.’ For many it has not even started yet!