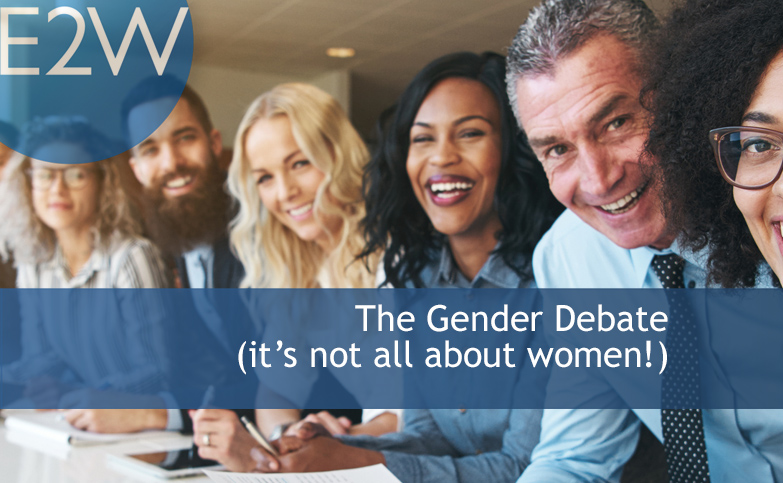 The Gender Debate (it’s not all about women!) - “Behind every great man is a great woman,”

“Beside every great person is another great person, living and working as they would like.”

“Behind every great man is a great woman,” is these days considered a rather archaic expression, one that harks back to times gone by, thankfully, when wives, seemingly, selflessly supported husbands in their endeavours from the shadows of the kitchen.  An expression that befits our times a little better could be “Behind some male employment milestones in the twenty first century, a great woman has gone before.”

That expression doesn’t really slip off the tongue does it?!  No, I don’t think it’s going to stick but it’s worth investigating.

You don’t need me to tell you that these days, society is rather different than the world of “Behind every great man is a great woman.”  There are companies like E2W for starters, helping great women retain and secure senior roles in financial services, traditionally a very male dominated industry and working environment.  But, also, there are more women in the board room (although still not enough); the government is starting to understand the benefits of gender parity to business and society as a whole and is introducing measures to ensure companies are accountable for their gender diversity – gender pay gap reporting and the women in finance charter for example.  And, interestingly, more and more men are starting to realise how gender equality could benefit them.

I wrote about my approach to life some time ago and although I wasn’t alone in my approach, I certainly felt as though I was in the minority.  Firstly, I strongly believe that everyone should be able to live their lives according to their own choices, not those proscribed by society.

Secondly, I had realised that gender parity in all aspects of life was going to yield me greater dividends, both personally and professionally.  By us both working professionally and in the home, I realised that my wife and I would be creating a blue print for life for our children to, hopefully, follow and we hoped that it would make them happier and well-rounded human beings - and we think it has.

But, unfortunately, we didn’t have shared parental leave and men working flexibly was still a long way off; maternity leave allowed women paid time off work to care for their newborns and then if they wanted to return to work, they could work part-time, probably sacrificing career progression though.  Women have led the way, forging ahead with these improvements to working life and men are now following.

As women have redefined their roles in life, rising through the ranks of organisations and having a place at the board room table next to men, men have felt that they can redefine theirs.  They don’t want to be like their forefathers who dedicated themselves to their jobs and professions and weren’t very hands-on with childcare, running the household, creating meals and the like.  There is a lot of press coverage about millennials and their approach to life – working to live rather than living to work.  They don’t all want the hard slog of working all hours and not having much of a life aside from that.

It seems to me that these days, when it comes to male employment, there isn’t as much of a stereotype as there used to be.  Men are carving out their own working patterns – working from home, working part-time, working flexibly.  And for those expecting a family, there is the option of shared parental leave.

This continues to be under-subscribed in the UK but I think it’s only a matter of time before it becomes more popular.  This is a great scheme not only for men but also for women as it helps in starting to shift society’s perception of what is ‘women’s work’ and what is ‘men’s work’.

So, this September, after your summer holidays, as we all return to routine, why not think about changing yours?  Women, please continue to shake things up and become pioneers in finding new ways to work.  Men, how could you work more effectively?  Would some flexible working allow you, actually, to squeeze more out of the day?  If you and your partner are expecting a baby, how could shared parental leave work for you?

Let’s change these archaic expressions and impressions of society and ensure that we’re working towards “Beside every great person is another great person, living and working as they would like.”

The Gender Debate (it’s not all about women!) – Workshop on 16th October – Details and Register.

Gender & Diversity is a complicated issue, not least because of the emotional reaction it can create in many well-intentioned people, passionately seeking equality.  The focus on improving gender diversity has traditionally been concentrated towards supporting women but there is increasing acceptance that this approach, whilst valuable, needs to be complemented by supporting men as well.  After all they are equal beneficiaries of a more diverse workplace, society and home.

The workplace needs men and women working as equals but it is clear that being male is more complex than ever and until some of these issues are addressed the ability to achieve diversity and equality will be limited, as will the economic value.

This workshop, aimed at people committed to improving diversity, will start by raising awareness of both male and female related challenges in order that these can considered and addressed as part of a more effective solution to achieving gender equality in the workplace.