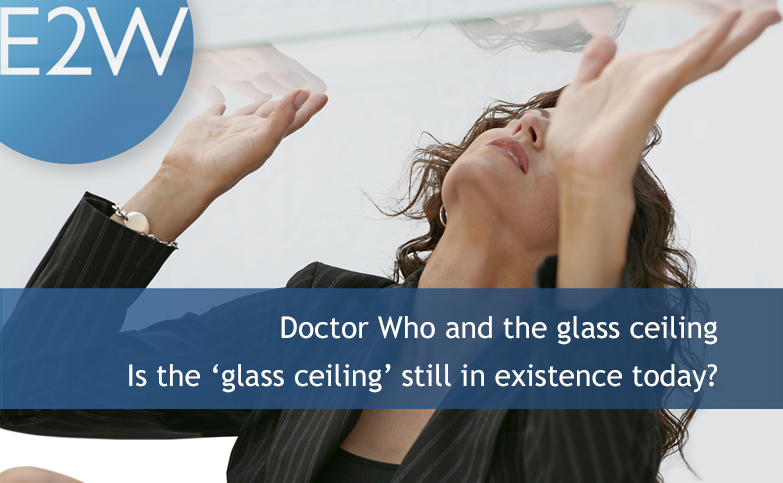 Is the ‘glass ceiling’ still in existence today?

Doctor Who and the glass ceiling

The phrase ‘glass ceiling’ is 40 years old this year – is it still relevant in today’s workplace?

Regardless of whether you’re a fan of Doctor Who, it’s interesting that for the first time there’s going to be a female doctor.  In one of the BBC adverts for the programme, there’s the new doctor, actress Jodie Whittaker, standing beneath a glass ceiling that shatters.  In the realm of Doctor Who, women have broken through the glass ceiling and Jodie is making history.

But where does this expression come from and is it still relevant today in the world of financial services?

An HR professional in the US called Marilyn Loden apparently used the expression for the first time forty years ago this year at a panel discussion.  As she says in this piece, Ms Loden could hear how self-deprecating her female peers were and how they took the blame for their lack of career progression; she believed, however, that there were invisible cultural barriers within organisations which were preventing women from climbing the career ladder beyond middle management; of course, those invisible barriers were the glass ceiling.

Ms Loden was clearly very perceptive in 1978, at a time when many still saw women as homemakers and mothers.  But it also saddens me that the glass ceiling for women is still being discussed today – after all it’s not that alien a phrase to be alluded to in a Doctor Who ad.

At E2W, we speak to our members, HR departments and recruiters from the financial services sector and we hear about these cultural barriers time and time again.  Cultural barriers refer to the way an organisation is managed, how employees are hired, who’s doing the hiring and who’s being hired, how they are helped to achieve promotion, whether there are flexible- working opportunities, whether enough effort is being invested in senior female employee retention…

We have recently published surveys on our website and LinkedIn about whether your firm is working for you and whether we need to change recruitment practices.  As a result, we have some very fresh evidence about barriers on which to draw.

Question: How have you benefitted from the firm’s (responder’s employer) diversity and inclusion activities?
67% answered that they hadn’t.

Question: Do you believe that the firm provides adequate opportunities for career progression with the support of senior managers (e.g. training, mentoring, coaching)?
72% said no.

Question:  What is the firm doing to ensure current female employees reach their full potential?
56% said nothing – this is the most reassuring stat in that 44% of firms are doing something.

Question:  What is the firm doing to retain current female employees?
89% said nothing or very little.

This data suggests that cultural barriers still exist despite the fact that gender equality is making the headlines and gaining government support (with the likes of the Women in Finance Charter and the gender pay gap reporting.)  The answers that we are seeing to these questions indicate that time and money is not being spent on nurturing female talent, especially existing senior women in organisations.  One respondent thought that effort was made when it was too late, once a woman had resigned; then time was being invested in what went wrong and why she might have left.

As experts in our field, E2W work with firms committed to becoming more gender diverse, helping them to implement proven strategies in line with our five pillars methodology.  This methodology has helped our clients start to remove their glass ceilings. They are promoting, recruiting and retaining more women than their competitors.  As a result, they are not only better places for everyone to work, they have gained a competitive advantage as a result: they have the best people for the job, in the job.

These strategies will create a cultural shift for sure, but it needs to be led from the top.  The culture of an organisation has been acknowledged as critical by John Glen, Economic Secretary to the Treasury, and Victoria Atkins, Minister for Women in their recent Government Response to the Treasury Select Committee’s Women in Finance report: “There is no doubt that workplace culture is a vital part of solving this puzzle. The culture of a firm or sector can have a significant impact on the progression of women, and this can be one of the toughest issues to address.”

So, to conclude, sadly, I do think that the expression of a glass ceiling for women’s careers is still relevant today.  Progress has been made without a doubt but there is still work to be done.  E2W is working with organisations, groups and associations are pressing for change, as is the government.  Please keep trying to break these barriers from within though too, and like Jodie Whittaker, don’t apologise!