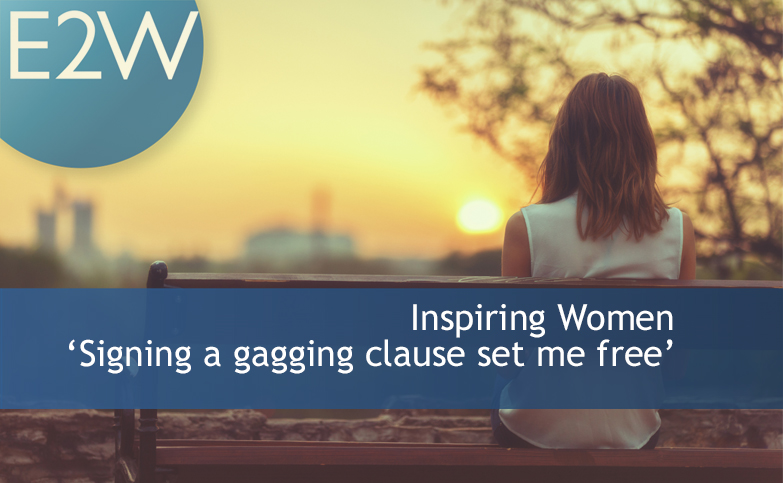 Non-disclosure agreements (NDAs) have been in the news recently - their controversial use by Harvey Weinstein and President Trump's lawyer has led some to question whether they disempower women. Here, one woman tells her story of signing an NDA and explains how it brought her a sense of justice.

I had worked my way up in a man's world, from being the only woman on a trading floor of more than 600 people.

For most of my career, my gender was not a problem, but then five years into my last job in that industry, my working environment became intolerable. I felt marginalised in the office - for example, strip clubs were used as "after-dinner entertainment" with clients as well as for pre-drinks before team nights out. When I said I didn't want to go, it was made clear to me that if I wasn't going to be part of the team then I shouldn't be there.

I decided to raise a concern about the way I was being treated in my job. The company refused to take this further but I began searching in my files on the system. I was horrified to discover that I was being grossly underpaid compared to my male colleagues.

I raised an official grievance against the company based on unequal pay. I was at an equal rank to my two colleagues but my company argued that I was basically their secretary.

The first step was to go through an internal grievance hearing, where one of the CEOs openly said that they weren't going to do anything. His passing shot to me was: "Don't worry, we don't take this personally." I've never forgotten it. I said to him: "Well that's lovely for you, because this is really personal to me."

It took two years for the tribunal to start. In the meantime my employers tried to settle the case but only offered a very low rate of compensation. I feel that they were testing my mettle, to see if I would crack.

Throughout this drawn-out process I suffered from panic attacks. I was literally a shell of myself. I was consumed by the case.

On the morning that we were finally in court, they again offered to settle but it was less money than they'd previously offered. They realised people are at their weakest before they stand up in court but my lawyer encouraged me to carry on. I went on to give evidence for five days.

The tribunal system is broken and needs to be reformed.

When you're cross-examined, the defence try to argue with you about the finer points of the law, which of course you're ill-equipped to answer.

The odds are stacked against the employee because they can't afford the powerful legal protection that the companies can; it's why so many settlement agreements and NDAs are signed.

I knew I couldn't go on anymore. Had the tribunal not gone my way I would have had to go to the High Court and if I then lost I would have carried all the costs.

When they offered to again settle, after my boss had taken the stand, my barrister said: "I think this is the right number now and I think you need to do it."

The settlement agreement was for hundreds of thousands of pounds, and along with this settlement came a non-disclosure agreement.

I was just overwhelmed with the relief and didn't really have a clue what was going on during the six-hour meeting. The agreement is worded in such a legal way that it's almost impossible to comprehend.

But I did know that by signing it, my life would be mine again and that was the most important thing to me.

The NDA ended up being a 14-page document. It stipulates that I can't talk about:

I felt no sense of conflict signing it because I needed the situation to be over. I already couldn't talk about the case - even with my husband and friends - because I found it so traumatic. I didn't feel signing away my right to talk about it would make any difference.

I signed my NDA long before the Me Too movement, when there was less social awareness about these issues, so I can understand the criticisms of these agreements.

In terms of the sisterhood, of course you want to warn other women to not walk into the lion's den.

Unfortunately this is such a personal fight - it's your career, it's your life, it's your money - and that sisterhood doesn't help you in that moment of turmoil.

I know there are arguments that NDAs should be scrapped but I believe that choice gives the victims - women - hope and the ability to take back some power.

These powerful companies can destroy your career and if they can't protect their brand with a gagging clause, they would never settle anything - what's in it for them?

You're faced with a difficult case that will take an incredibly long time and where the odds are very low that you will win, but you're told "we could try and negotiate some type of financial package, you could move on and we'll leave it at that, you'll just have to sign an agreement".

If that wasn't available, how many people do you really think would come forward?

That agreement allowed me to change my life.

I moved cities, did training courses in a new field and started my own business. The NDA gave me the money to move on.

It also allowed me to tell everybody that it was over. Of course, I couldn't say what had happened, but to say "I'm happy" was enough.

If you would like to share your career in financial services with E2W followers, or if you have made a contribution to a project or initiative within your organisation, please contact us.