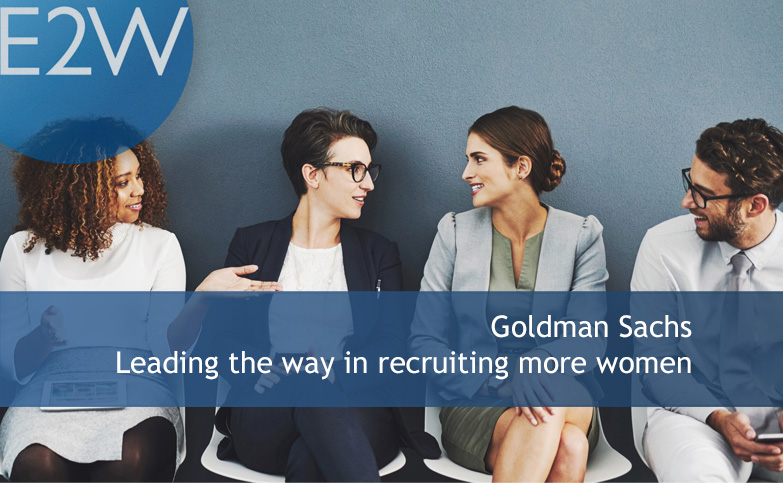 Goldman Sachs is making the news at the moment as CEO of 12 years Lloyd Blankfein steps down and hands over the reins of this behemoth of investment banking to David Solomon.  But I would like to bring your attention to something else, something that really matters to us at E2W and shows how slowly, things are starting to change.

In October last year I published a post “Gender Diversity - We cannot solve our problems with the same thinking we used to create them.”  The points I made in the article were that if firms were going to meet their various commitments to improve gender diversity, they would need to recruit significantly more women than men into senior roles over the following few years. To achieve this, they would need to change the way they recruit.

Since then we have, of course, gained greater insight into gender balance through Gender Pay Gap Reporting: we saw that the top quartile earners in most investment banks were 80% male.  All the banks said they were committed to improving the number of women at the top and that changing the way they recruit was high on the list of priorities.

Using the powers of LinkedIn Premium, specifically the senior hires’ functionality, we can see how firms are progressing against these targets.

One firm really stands out from the rest and that’s E2W client Goldman Sachs.  Goldman Sachs has had one of the highest levels of recruitment in 2018 and it’s encouraging to see that approximately 30% of the senior hires at Goldman Sachs International in London have been women.  Whilst this remains below the 50% or more that will be required to meet the targets of gender parity at all levels, it is nonetheless impressive when compared to the bank’s peers.

This is particularly pleasing to see given the unfair press that Goldman Sachs received for being a late signatory to the Women in Finance Charter. They always claimed they were doing the right things and these recruitment statistics seem to back that up.

Other investment banks are not doing so well, and if the figures in LinkedIn represent a strong indication then we are, sadly, going backwards not forwards.  Figures using the same methodology for banks like UBS, Deutsche, JP Morgan & BaML all show that they have only been able to recruit between 7-15% of women into senior positions. I suspect that cost and time to hire take precedence over gender diversity in these firms’ recruitment priorities.

As a senior recruiter at one of these banks said to me, “I would suggest that the LinkedIn stats are not representative of the work that we have done … and thank you for your interest in working with us but at this time we are not looking to add new recruitment firms.”

I am passionate about improving gender diversity in financial services, so I hope that he is right and that the LinkedIn figures paint an inaccurate picture.  Due to the timetable for Gender Pay Gap Reporting we will not find out until April 2020…. a long wait.

In the meantime, we have to hope that new CEO David Solomon will not change Goldman Sach’s gender recruitment strategies.  In the past, where Goldman Sachs have led, others have followed.  Let’s hope so.  Again, time will tell.