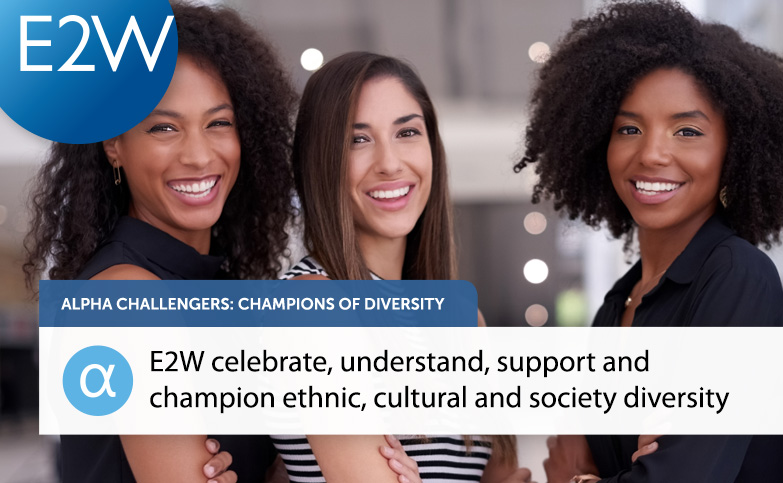 Why is ethnic, cultural and social diversity important, especially in the workplace?

Ethnic diversity was the central theme and our special guests were: Zandile Nkhata, Natznet Tesfay, Nolly Maseko, Ursula Henry and Yvonne Kunihira-Davidson at latest in the series of E2W Alpha Challengers – Champions of Diversity Events. Hosted by Georgina Toft and Sara Pistilli of the E2W advisory board.

Alpha Challenger, Georgina Toft opened the discussion with the key question: why is ethnic, cultural and social diversity important, especially in the workplace?

The panel described the importance of companies creating an environment in which all are welcome and feel they belong, with Yvonne highlighting the need to ensure all voices are heard and an equal opportunity to develop, allowing firms to capitalise on their talent.

Members emphasised the role of networks in creating support systems and the ability to act as a collective voice. Natznet detailed the establishment of the Empower network at IHS Markit which brings together colleagues from a variety of backgrounds allowing them to act as a group to push for change, particularly following the death of George Floyd and resulting protests. Zandile emphasised the role of networks as a safe space for BAME employees to raise concerns and experiences of microaggressions in the workplace, and in particular the memories triggered in the wake of George Floyd’s death.

Discussion also touched on the need to bridge the gap between the more diverse lower levels of organisations and the less diverse senior positions – the ‘snowy peak’. Nolly outlined the importance of mentorship and reverse-mentorship, alongside the need for senior leadership to act on promises made. Similarly, Ursula discussed the need to push for change now, and that successive generations shouldn’t have to be part of this same dialogue. Moreover, how part of this change should be having open conversations about race in the workplace, to help reduce the feeling of awkwardness that many feel around such discussions.

The question then shifted to how allyship can work, and the steps that people can take to be an ally in the workplace....

Zandile outlined several actions everyone can take, including talking – having conversations around race and racism in the workplace; educating yourself – learning of the different issues that BAME people can face; and being committed to pushing for change, and not being a bystander to injustice. Emphasised was the need for data – having clear data on ethnic makeup and pay gap in firms allows for issues to be identified. All members of the panel touched on the need for firms to make clear the value of data in order to encourage people to disclose. Furthermore, while collecting this data is a good start, there must continue to be pressure on firms to act afterward.

The event then opened up to questions, with a focus on how individuals can help pressure their workplaces to gather and publish data, and what systemic changes should be advocated – for example, blind CVs. The need to review hiring practices was mentioned, especially how firms should look for diverse candidates. Finally, the importance of mentorship, sponsorship and BAME networks was again emphasised.

Overall, the event allowed for an insightful and thought-provoking discussion of ethnic, cultural and social diversity in the workplace.