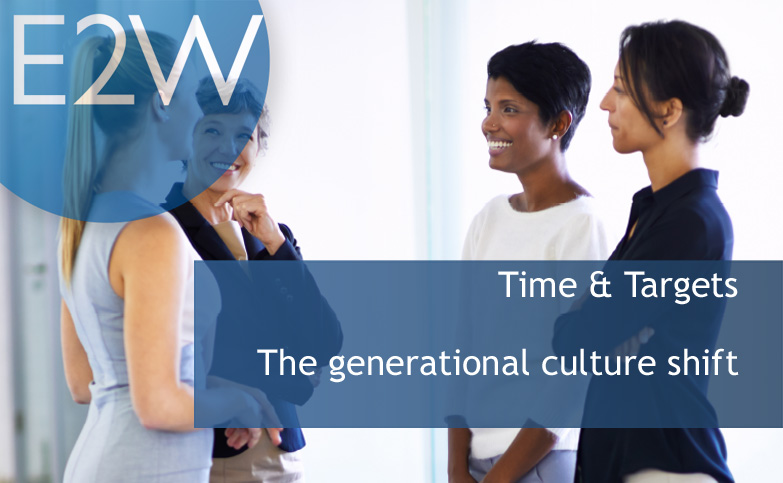 Targets & Time - How valuable are they in achieving gender parity?

Previously, we’ve discussed the value of gender targets in the move towards gender-balanced workforces, and despaired that at the current pace of progress it will take over a century until gender parity is established at all levels across financial services.

Targets have been valuable in making progress. They are quantifiable goals, publically committed to, and transparent – companies that set them demonstrate they take diversity seriously, and believe in accountability. As Jayne-Anne Gadhia said upon unveiling the Women in Finance Charter, “The issue will now be addressed in a way the City recognises. Make it public, measure it and report on it. What gets published gets done.”

Current initiatives in place are making important progress. But, is it possible that we could see a shift in financial services at a quicker pace than currently predicted? How can we consider the value of time? Those now entering the workforce are of a generation with a much more inclusive and accepting attitude towards diversity – could this have an impact in the move towards gender parity?

It is unsurprising that younger generations tend to have more progressive views – this has always been the case. Millennials (generation Y) were far more likely to grow up with both parents working, or a mother as the primary breadwinner. The research shows it – over two thirds of people aged 13-34 say gender no longer defines destiny or behaviour, and more millennial women aim to be bosses (34%) than their male counterparts (24%). Moreover, 65% admit that it’s still easier for men to get ahead and that this needs to change.

With younger generations entering the workforce – and with the majority of graduate level jobs being filled by women - surely we should see some acceleration in the pace of progress?

While accepting attitudes are vital in moving towards gender parity in the workplace, there is another side to the story. Millennials and following generations may simply not be able to afford not to work, or take career breaks – women or men. High student debt combined with the challenges of getting on the housing ladder and rising cost of living means that many may have to prioritise their career before having a family. Evidence shows that younger generations are getting married later, having children later, and having fewer of them. Not only will establishing a career first be their focus, once they have families they are more likely to push back against the traditional ‘work-life balance’, favouring more flexible arrangements.

As a result, men and women will be more likely to share care responsibility - one partner taking a career break for childcare may not be feasible. Culture is making a shift this way as the number of stay-at-home mums has steadily fallen. Since 1993, there has been a 31% decrease in the number of mothers staying home as primary carer, with just over 2 million in the role. At the same time, there has been some increase in the number of stay at home dads, doubling over 20 years to 230,000.

Couples who can afford to take a career break to care for children may find that the decision is less automatic than it once was. The rise of the female breadwinner means that for many it is simply more economically viable for the father to take on the majority of care - just over 25% of women report earning more than their partner. Flexible working and parental leave is becoming a priority for men in the workplace as well.

Perhaps, as circumstances, attitudes and culture change, it will be time that has a major impact on establishing gender-balanced workplaces. Not to say that initiatives are unimportant - quite the opposite. They are key in setting the pace and making much needed headway now, being the foundation on which progress can build.