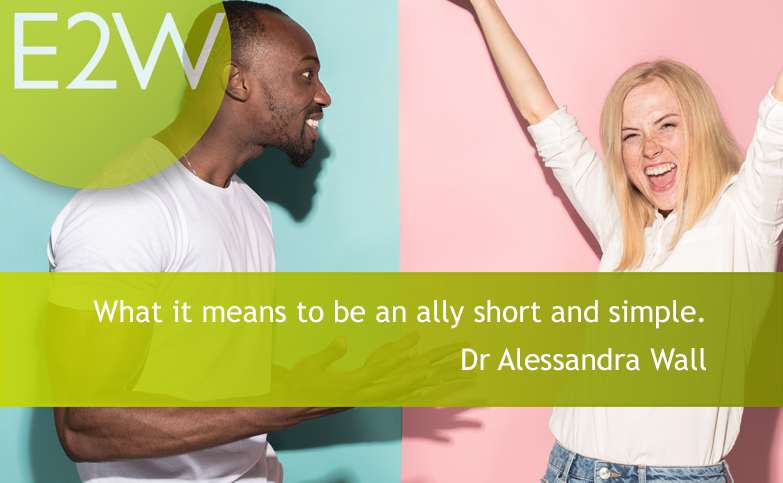 What it means to be an ally short and simple.

“I’m just not sure what I can do about it…”
“Listen, I’m not the one [insert discriminating behavior or state]! So what am I suppose to do?”

It’s hard to be part of a system that unconsciously yet actively holds people down. It’s even harder, to be the person held back by that system. I think a lot of us recognize that.

From men in offices and breakrooms who don’t want to feel like the enemy, to white women who truly believe in the importance of intersectionality, and everything in between, it’s frustrating being faced with a problem you know you are party to, yet powerless to change on your own.

That’s where the concept of allyship comes in. I first came across the notion of social allies while learning about women, leadership and the workplace.  Allyship was a way for men who felt powerless and/or part of the problem to step up and help women challenge discrimination at work. The idea was to have them speak up and call out gender biased interactions when they witnessed them, and support the women who were already trying to challenge a broken system.

Then next time I came across the notion of ally was while learning about intersectional feminism (if you have no idea what this is, click here for a simple and VERY important rundown). Here again, allyship was presented as a way to actively and intentionally support people whose race, culture or identity had them marginalized.  In this case, white and/or able-bodied/hetero/affluent women were being asked to use their position of privilege, their platforms, and their voices to amplify and back the words and needs of others.

When done properly allyship can be really powerful. When done improperly it’s at best superficial and ineffective and at worst sycophantic or condescending.

What it means to be an ally short and simple.

Being an ally simply means standing by a person or group that is being marginalized or oppressed and supporting their cause with your voice AND actions. In even simpler terms, it means:

9 Things You Can do to be a real ally

1. Listen up!
I’m neither the first nor the last to start here, but it bears repeating. Being an ally means being open to the idea that your perception of things is not the only one. Take the time to listen to the people you want to support with an open mind and the intent to understand.

2. Don’t make them do all the work.
Listening is great, but it’s exhausting to be the spokesperson for a whole cause, so don’t rely on others to be your only source of knowledge. Do your research. Whoever it is you want to support I guarantee there are thousands of article, books, and video about their issues, needs, and perspectives. Do the work, read, learn and educate yourself, don’t make someone you know or follow online your personal Google search engine.

3.  Ask them what they need.
Let’s say you’re a man working in an office and keenly aware of inequalities in how your female colleagues are treated. You’ll find a ton of advice online on how to be a good ally, but the best people to ask are the women you’re trying to stand by. I’ve heard everything from women who just wish that men would work on their own interrupting behaviors, to ladies who would really appreciate a male colleague to call out people who are labeling them as emotional or dismissing their ideas. If you want your support to really count, then go to the source for suggestions.

4. Speak up when you see something that doesn’t sit right with you.

5. Know what you stand for, be clear on your values, define your rights and wrongs.
This is essential for three reasons: 1) You can’t do #4 if you don’t have a sense of what matters to you. 2) You need to know what rules you’re playing by if you want to take action IN THE MOMENT (or risk being caught in a shoulda, coulda, woulda moment). 3) This goes back to previous discussions about life satisfaction, but generally speaking, you are happiest when your actions align with your values, so it’s good practice to be clear on what they are.

6. Don’t make it about you.
Although you might feel quite selfless or even proud of your choice to take a stand, this is whole ally thing is not about you. Being an ally is not your chance to get kudos for your great humanity, admiration from others, or shine a light on your actions. It’s about bringing attention and support to others.

Also in the category ‘making it about yourself’ in the process of being an ally you are bound to make mistakes. Faux pas are part of the growing process, so chances are you’ll hear, be called out on, or corrected for some of the things you say and do. When it happens, take a BIG breath (or 5) and remember, you decided to look at the world through someone else’s lens, it’s hard work. You will make mistakes, you will put your foot in your mouth and feedback is how you get better at it.

7. Make it about what you do not who you are.
If you think about being an ally as a trait, as something you are, then you are less likely to actively do what it takes to support others. You don’t become an ally just because you said so, or because stand up once or twice. You are an ally through continuous action and choice. This is something you have to work on every. single. day. in big and small ways.

8. Give credit where credit is due.
If you’re like me you’ll be learning, reading and hearing a lot of interesting, compelling and challenging information, make sure you let others know who your sources are. Quoting a source isn’t the only way of giving credit, where credit is due. One complaint I often hear from women is that their ideas are co-opted or aren’t heard unless voiced by a male colleague. Be an ally by making sure you’re not co-opting someone else’s ideas and gently calling your colleagues when you see them do it to others.

9. Walk the talk
The most important things you can do as an ally is to be aware of your own contribution to a broken system. This means being informed (#1 & #2), being clear about what is wrong with the way things work ( #5) and constantly checking your own words and actions for consistency. There is so much we can individually do to change a larger system, although it’s easy to feel powerless when faced with the behemoth that is “the way things are”.

Dr Alessandra Wall, a psychologist and coach and now a guest contributor to E2W’s Blog and Newsletters. Alessandra is going to help us in our continued mission to support you in your career path by, over the next few months, contributing a series of articles surrounding career progression, managing work scenarios, overcoming self-confidence issues and other pertinent topics.  Some of you may already know of Alessandra thanks to her social media presence, or you may have heard her speak.

Alessandra is based in California and she will be visiting us & the E2W community in 2019.  In the meantime, please digest and embrace her articles, engage with us and Alessandra – let us know your thoughts, and help us help you reach your career goals.

Alessandra can be contacted via E2W