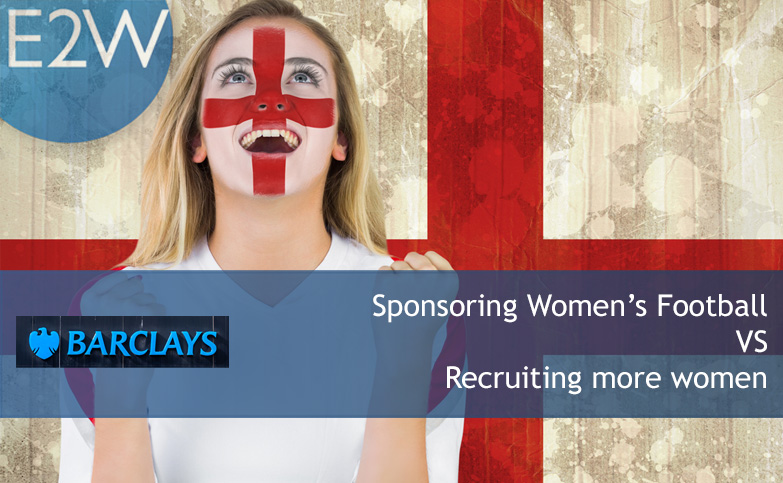 As we are readying ourselves to cheer the Lionesses through another, hopefully, successful women’s Football World Cup campaign, it reminded me of the announcement by the Football Association that Barclays is to become the FA Women's Super League’s first ever title sponsor, in a deal the Football Association has called "the biggest ever investment in UK women's sport by a brand.” It is reportedly worth many millions of pounds.

At about the same time, Barclays reported its latest gender pay gap statistics.

Hiring can be difficult. Others in the banking industry report similar pay gaps driven by similar levels of female representation. We cannot hire enough women at senior levels to address the balance, because the industry has not attracted enough women over the last few decades.”

I find these statements from Jes Staley really interesting. He’s right, hiring can be difficult, Barclays is not alone within the banking industry when it comes to the gender pay gap and Barclays’ peers do face similar challenges; but, some of those peers have assessed their game plans, they are approaching the issue of recruiting more senior women differently, more effectively, and are, in fact, slowly moving towards closing their gender pay gaps.

When we talk to Barclays’ recruitment teams about releasing roles to E2W and our extensive network of female talent, they tell us that they don’t have the budget – apparently time and cost of hire are a higher priority than diversity and reducing the gender pay gap.  Any football manager will tell you that there’s always budget but it’s how you spend it that matters.

It is disappointing that firms like Barclays fail to make progress in gender parity. There is no excuse for poor numbers in female leadership, the talent is available, yet these firms fail both in internal promotions and in recruiting, constantly giving excuses including “there are no women”, turning down opportunities to engage women. Given the considerable investment made in large “diversity” teams in the Bank, which was designed to influence change, I would expect to see far better numbers. I can only conclude that sponsorships like this are therefore branding exercises, with the return on investment unrelated to driving real change in Financial Services, making Barclays look like it is supporting women when it is in fact failing to address its processes to attract and retain talent, failing to give women equal opportunity. I am all for initiatives like this, it is important to support such great achievement, but it is not a matter of either/or and if it is, Barclays owe it to its clients, shareholders and employees to choose to invest in growing its talent base. Similarly, giving media profile to the handful of women who do make it through is  not enough. This is not about ticking boxes and the failure has a daily negative impact on shareholder value.

At E2W, we know from our experience and research that when time and cost of hire matter more than the quality of the candidate short list, it’s hard to find the right woman for the job.  The candidate list will be dominated by men with a smattering of women who have been hastily plucked from the team’s database – they may not be right for the job, they may not want to leave their existing roles but hey, you need some token women on the list so they’ll do. And we’re not exaggerating – our members tell us that this happens.

Investing more in recruitment pays dividends. Fact. Engaging E2W so that we can source candidates from our network of women would mean that your candidate list is more balanced, with qualified men and qualified women making up the pile of CVs. Regardless of who you ultimately employ, the candidate list matters – here are just three reasons why:

By investing in the Women's Football, Barclays is supporting the creation of role models for younger generations. That is admirable and we applaud it to a certain extent, but we can’t help thinking that the money could have been better spent on trying to achieve the gender parity goal, on investing in senior women within the organisation and creating role models for their own employees.  Perhaps the few “lionesses” at the top of Barclays will start to roar to demand change.

An E2W member and ex Barclays employee gives her thoughts,

"My honest view is that it was a positive move to shift some of our sponsorship focus away from male-centric sports (especially golf) and to sponsor the Women's football."

Footnote: All the firms that are partnering with E2W reported positive movement in the proportion of women in top quartile paying roles in their 2018 gender pay gap report (reported April 2019).  Barclays, like a lot of banks, reported a negative movement.

At E2W we have access to a community of approximately half the women working in senior positions in London’s financial markets. For most roles, we have several candidates who are likely to be the best person for the job.