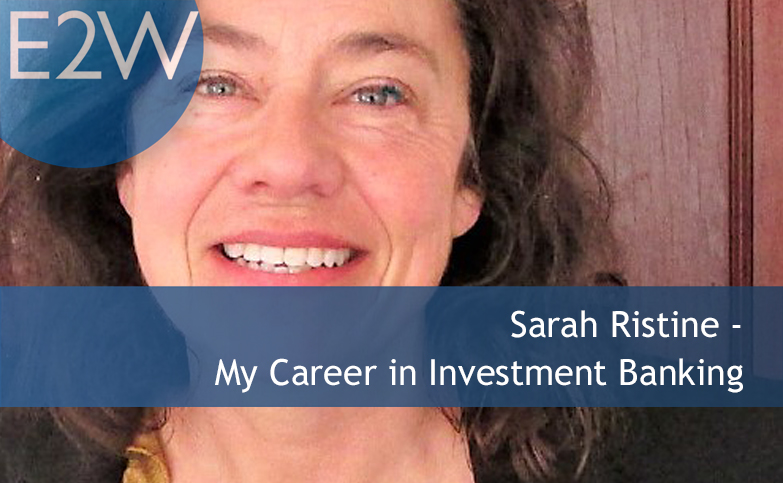 Sarah Ristine walks us through her successful career

As part of our Vote100 series on women’s careers, Sarah Ristine walks us through her successful career at some of the leading investment banks in North America and London.

Like a lot of English and Theater majors, I came around to this career through the side door.   In the late 1990’s my husband and I moved from Seattle Washington to the New York area, where we’re both from originally.   Now, we spent over a year in London and in my experience the weather was far gloomier in the Pacific Northwest.

Anyway, I knew that Kelly Temporary Agency had the JP Morgan contract which would be a toe hold in getting settled.   These were days when temping was easier and getting health insurance in the states wasn’t a nightmare.   Working at JP Morgan led to meeting a contact who got me consulting job at Deutsche Bank in back office operations .  I was proficient at getting long outstanding unsigned contracts back for execution.   I devoured information on swaps documentation, payments, FX, ISDA, who’s who in the counterparties, everything.   I became a permanent employee.     At a review session I was asked if I wanted to be in management.  Chaos ruled the day so I said no.  But the thing is, I didn’t really think it through.  I should have said yes absolutely yes rather than navigating invisibility and being okay with just fitting in.   Learning development not taken…

I was lucky to work with some wonderful managers there, all of whom showed warmth and guidance following  September 11th.    Our  midtown office had moved downtown to old Bankers Trust building following acquisition…and then moved across Liberty Street  to 4 World Trade Center in the summer of 2001.

I worked briefly in the Piscataway New Jersey business recovery center before working for over a year in the Deutsche Bank  London office.  Living and working in London was a dream come true – if only the timing were better.  So close to  9-11 coupled with my father’s unrelated untimely death we moved back to the states where I took a sabbatical.   In hindsight I wish we had stayed in London at least a bit more.  Road not taken…

After an unrelated follow up project for two months back in London ,  I worked at RBS through a consultancy that doesn’t exist anymore.   They offered to make me permanent twice which I passed on twice.  When I finally accepted, realizing that I need stability over the higher consultant hourly, they “decided to go in a different direction.”     The subprime debacle was starting to infiltrate everything. Continuing my self-education I put together the world of lending musical chairs and the pieces didn’t fit but I didn’t see the ferociousness of the bigger picture.   After RBS I went to Citibank and worked on transferring legacy trades to a clearing house.  In November 2007 the position ended and the greater unraveling and worst abuses came to light.

In August 2009 we moved to the SF Bay area where my husband had a job in solar energy.    I was a cat mom and host to my many in-laws as I figured out what to do next.     I did take a short course through the CFA Society on Investment Banking Fundamentals.      It felt like everyone was running a start up or coding like mad.  I tried to get on the bandwagon but it left me cold.

We moved back to NY in October 2015 for an opportunity my husband had in the solar power sector.   I got a job at Calypso Technology using my experience in back office operations to do inside sales for their front to back office enterprise software product.   I was grateful for the opportunity but they didn’t renew my contract.

I don’t have all the answers but am moving forward.    As with my passion projects in the creative arts, my interest in investment banking is  about communicating with people and learning globally and seeing what is the new shiny thing is and what remains fundamental.

Take every learning opportunity you can get, demand meetings when circumstances don’t allow you to get your job done, let people know what you’re about if your story differs from the group, and, cliché as it is, have fun and do good.    One more thing – the most important turning points will come in subtle ways.   No one will push it upon you to act in your own best interest when given the opportunity.   Recognize these moments when they happen.

I am now looking for my next opportuniy to make a difference in financial services.

Share Your Story
E2W is publishing the stories of women who have been working in financial services to celebrate this year’s 100 year anniversary of women securing the vote. We have two themes – “My Career…..” and  “My Contribution….”

My Career
What was it like to start a career during the swinging 60’s? Were you on a three-day week in the 1970’s? How did you fair in the yuppie loads-of-money 80’s? How politically correct were the 90’s? Did you experience the start of the digital revolution of the 00’s? Or perhaps you embarked on your career recently - has the industry lived up to, or surpassed, your expectations?

My Contribution
“My contribution to …” showcases our members’ and followers’ achievements.  Have you contributed successfully to a major project or initiative within financial services that you’d like to share with E2W and its supporters?

Read other stories in the series