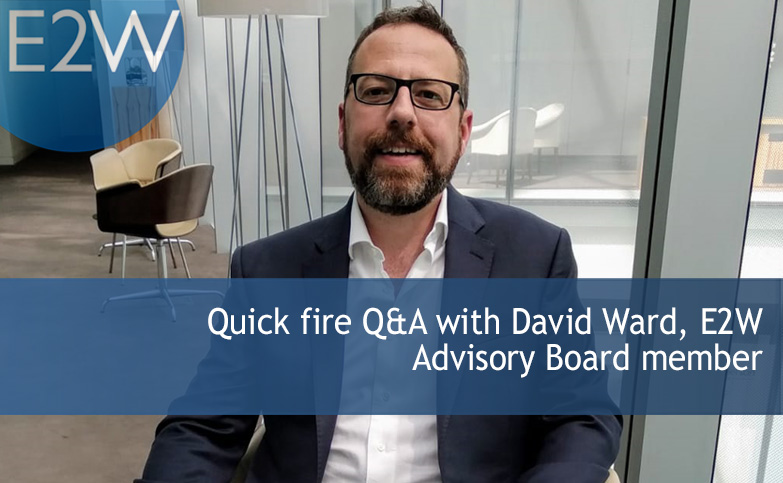 David has twenty years’ experience in audit and risk management having previously been Head of Operational Risk at Threadneedle Asset Management and Global Head of Operational Risk at ICAP Group. David has experience developing and implementing operational risk frameworks, risk based regulatory capital assessments, risk appetite and corporate governance. David prides himself on his ability to build strong relationships and is known for his candour and integrity.

Keen to help realise the benefits of diversity in the financial services industry, David believes redressing gender balance will only be achieved if both sexes are comfortable discussing the issue and removing barriers in partnership.

1. At a recent E2W Women in Finance Charter meeting with HM Treasury and senior E2W members, a discussion ensued about the challenge of a lack of senior female roles rather than the often reported lack of qualified women being a barrier. Do you have experience of this?

Role models with whom you can identify are extremely important. That’s true of gender as much as it is for your social or ethnic background. Seeing someone like you in a role helps you to see yourself in that role.

Considering the lack of qualified female candidates from a strictly academic perspective is a tough one. There is undoubtedly a gender imbalance in respect of women studying sciences and engineering. That said thinking of experience as part of your “qualifications” for a role brings the two issues together. As young women see successful role models in a variety of industries, it will undoubtedly help counter the perception of “boys’ subjects” and “girls’ subjects” at school.

2. What methods can be used to recognise outstanding performance in D&I verses highlighting poor performers.

In both instances we have to start focussing on the pro-active steps being taken by organisations. Statistics on the pay gap and women in senior roles are important. They absolutely reflect the reality we are facing. These stats will take years, possibly a generation or more to really show improvement. The changes to culture and working practices designed to attract, retain and promote women in the workforce will have an immediate, if not measurable impact. Reward those who are demonstrably taking these steps, and challenge others to follow.

3. What do we do better than anyone else in our field?

The premise of the firm is realising the gender dividend. Most serious firms, certainly in financial services, support and promote diversity and inclusion. The seriousness and effectiveness of these programmes varies…..wildly. E2W is a successful business underpinned by a core belief. Plenty of firms advertise as such, but few have it in their DNA.

4. What do we need to do today to pull the future toward us and beat our competition to the future?

We have to stay close to our roots. For E2W to be consumed in a pool of non-descript recruitment firms would be such a waste.

5. What are people thinking, but afraid to express?

I think there is a real danger that men will withdraw from discussion, or not ask questions, for fear of appearing out of touch or ignorant of the gender debate. That is a death knell for equality.

My view is that we have to persuade and get buy in. At times bold and direct steps need to be taken, “women only short lists” by the Labour Party for example. It’s a risk to take these steps for fear of alienation. That doesn’t make them wrong, it simply means they must be carefully considered.

The irony of this whole situation is that convincing men that there is a real gender dividend is critical to our success. Whilst it might feel like a battle to achieve equality, it can’t look like one and it can’t be the experience of the two sides.

6. During your career, has there been a time when you thought “Yes, I’ve made it!”?

I was promoted to a Global role (by a female leader) at ICAP Group. At the time, ICAP had three divisions and c.3,500 people. It represented the culmination of a lot of hard work and was pay off for taking the risk of change sectors within the finance industry. The people I worked with were critical be they managers, mentors or senior sponsors. Many of these people are now friends.

7. What has been the biggest challenge during your career and why? It could be one incident in particular or something more common in the industry, or even something to do with you and your development.

Recognising and accepting that I needed to take some time out.  I took a year off after leaving ICAP. One of the best decisions I have ever made in my life, and certainly the best in my professional life. I regrouped, rebalanced and came back to work with a fresh attitude and a much healthier work life balance.

8. What are your thoughts on the next generation of women in finance?

9. When you retire, what would you like to be remembered for?

How young I was when I retired! You can’t get on with everyone, but I hope the vast majority of people will have enjoyed working with me and would be happy to say hello if we pass in the street…..or on the beach……or the golf course….or relaxing over lunch in the pub.

For proper relaxation, I’d go for running or yoga. I often run to work in the morning. I’m lucky enough to be able to run through St James Park and down the Southbank. I come into Victoria station on the train rather than live in Pimlico!