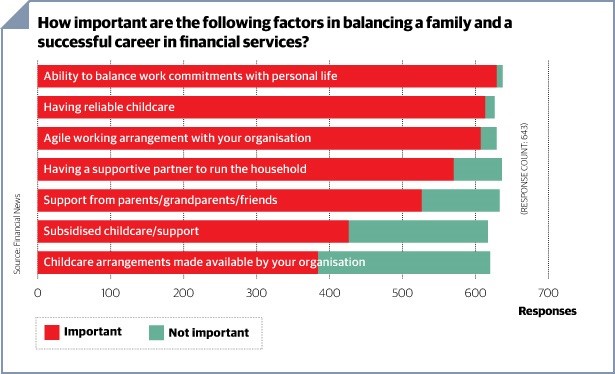 Although 80% of women surveyed rated reliable childcare as a very important factor for women balancing a family with a successful career in financial services, and around three-quarters said they considered their ability to balance work commitments with personal life to be vital, respondents showed a clear preference for the bulk of support to be provided by their partner, grandparents, parents or friends.

One mother of two, who had worked in investment banking for over 15 years, said: “One hundred percent reliable household and family support is mandatory… It is very difficult or almost impossible otherwise.”

Another senior investment banker, with three children, said: “One needs to be super-organised with several back-up plans in place, permanently.”

Those who had worked in the industry for between 10 and 15 years were most likely to rate the importance of supportive partners, family and friends highly, while those with under two years’ career experience were least likely to state similar. One respondent who had worked in asset management for about 15 years said: “I’d be lost without my mum. When the school calls me, it’s invariably her who I call.”

Just 19% of respondents saw employer-facilitated subsidised childcare as a very important factor in balancing work and family, while a third said childcare arrangements made available by their organisations were not important at all. Those who had worked in the industry for over 15 years were least likely to consider such factors important, with the greatest support for cheap or employer-led childcare coming from respondents with less than two years’ experience in finance.

One respondent, a mother of three with over 15 years’ experience in insurance, said she was “earning enough to pay for a fantastic nanny who we view as one of the family”. Another respondent, with a senior role in investment banking, said her husband looked after her daughter.

Neeha Khurana, international head of talent at Bank of America Merrill Lynch, said: “There has been a shift in our offering, in that maybe three or four years ago the support we offered our employees was programme-led, and over time we have absolutely learnt that individual-led discussions, coaching and support are much more helpful, because everybody’s needs are so different.”

She said: “We have many policies and benefits in place – flexible working policies, extra holidays, emergency childcare – but actually what I’m finding is that helping women to understand what support is available, beyond the formal policies, is critical.”

Why a broader support system matters

Louisa Symington-Mills works in private equity as chief operating officer at LPEQ, the international association of listed private equity companies, and is also the founder of Cityparents for working parents in the City, which includes networks of 8,000 Citymothers and Cityfathers.

She said she began setting up those networks in 2012 after returning from maternity leave and realising the importance of a broader support system: “It’s very challenging to build a successful career in the City and balance family life too. I found it very hard to access good networking opportunities, mainly because most events seemed to take place in the evening, which as a mother with a young baby and a long commute home from the City, wasn’t really possible.”

She said: “I was looking for networking that was very relevant to someone who wanted to progress a City career and have a family life, so started Citymothers to offer events with high-quality content at family-friendly times.”

It is an experience shared by Helen Burton, a partner in the banking group at law firm Ashurst and a member of the firm’s global diversity and inclusion advisory group. She said: “I do think that women who are trying to fit everything in are very efficient, and they don’t tend to stand around at the coffee machine for 30 minutes at a time. But then because of that, you miss out on the networking.”

She said: “You miss out on the social side, and that is an important part of career progression, which you just have to work harder to create.”

Burton said: “The problem with law… is that there are fewer places to go, and there tends to be less ability to vary your role. In accountancy and in banking there are so many different roles, whereas in law you can’t really change your specialisation or step back easily into a non-client facing role.”

Flexible working for all

In such a context, it is perhaps unsurprising that 58% of respondents classified agile or flexible working arrangements as of the utmost importance. Support for such arrangements peaked among respondents who had worked in financial services for between 10 and 15 years.

One respondent, a mother of one who had worked in risk and compliance for over 10 years, said the industry needed to “recognise the benefits of a different approach”. She added: “There isn’t just the only way to do business.”

Many respondents highlighted the need for a broader acceptance of varied working arrangements in financial services to ensure programmes agreed at the top of organisations were actually achievable in practice.

One respondent working in M&A advisory asked: “Why can’t everyone be forced to work their hours flexibly and not more? So that ‘face time’ and late evenings aren’t part of getting the job done.”

Another respondent, working in asset management, said: “I think being the one person in the team on flexible working or leaving at 4.59pm every day makes you look bad, and not a team player, like you’re counting every minute.”

A mother in investment banking wrote: “To be clear, flexible working does not mean less work! It means you work outside usual working hours – I do work in the tube, late at night, and at weekends if necessary.”

Indeed, a number were at pains to point out that flexible working should not be treated as a gender-specific issue. A respondent from the risk and compliance sector said her male counterparts would also benefit from greater flexibility at work: “I believe that all of this is true also for male counterparts. It is time to look at things in a global manner to ensure that women don’t stay the eternal group that has to be treated in a different manner, and therefore always vulnerable.”

Helen Steers is a partner and head of Pantheon’s European investment team, and also a co-founder and the vice-chair of Level 20, set up to encourage women to succeed in private equity. She said: “I have three children and I’ve been working in the private equity industry for 25 years now… Basically it has just been a continuous juggle between work and home, just trying to get everything done, and having to make compromises along the way in everything, really.”

But she added she was keen for the whole work-life balance discussion to be seen as much broader, and not just something that affects women, or mothers: “I have many people in my team, men and women, who have families and personal responsibilities, all of whom have to think about these things.”