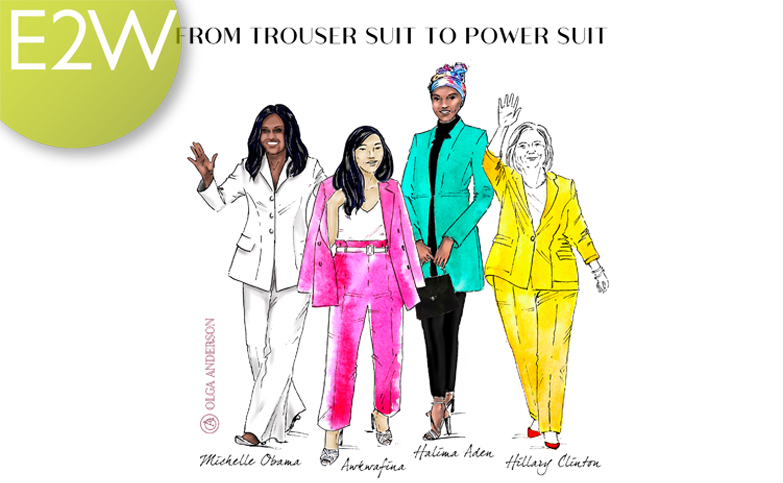 From Trouser Suit to Power Suit

Contemporary times are blessed with the gradual, historic development of the trouser suit worn by women as a statement fashion piece, yet it is undeniable that embedded agendas transform the trouser suit from a mere style to a powerful testimony which defies old-fashioned paradigms. Through distorting an originally masculine dominated attire, women who choose to dress in trouser suits instantly contribute to the continued fight in breaking down gendered limitations that centuries of patriarchy weaved into our societies- all whilst looking great.

Breaking Down Gender Barriers…One Trouser Suit at a Time

Validation from the male sphere is not what females are seeking by sporting a traditionally masculine wardrobe essential, rather it furthers the empowerment of women irrespective of men- it’s not a competition with men but rather a challenge to their sense of superiority. “As the first African-American First Lady, Michelle Obama is an influential and powerful woman who does not shy away from wearing trouser suits despite the possible negative response one may receive as someone in the spotlight.

Beyond the White House, Michelle has been successful in creating her own image which strays from her simply being the ‘Presidents wife’; proving herself to be as powerful as the men who dominate her world. As a busy woman, she has shown that incorporating a passion for fashion within a busy, professional schedule can be possible and highly effective. In her ‘Becoming’ book tour, Michelle’s attire consisted of a variety of pantsuits which ranged from an eye-catching silver suit to a custom Stine Goya baby pink suit, to a bright purple number with a bulky belt to accentuate her feminine silhouette. These outfits only scratch the surface of her extensive wardrobe. Through dressing in such bold trouser suits, Michelle factors her desire for change in political and social environments in her outfit choices, empowering females with a feminine take of the previous solely masculine outfit.

Clinton and her Pantsuit Nation

Powerful females often entwine fashion statements such as trousers suits in male dominated environments in order to assert themselves and excel. Notorious for her pantsuits, Hillary Clinton established a widespread support network during her 2016 election which was built upon social media groups that used Clinton’s pantsuits as a symbol amid her political campaign. Fundamentally, the trouser suit offers a relationship between fashion and morals that explore immigration, race, and women’s rights. The pantsuit embodies the fusion of the fashion industry with politics, and this allows for ordinary women who choose to sport a trouser suit to make a political statement in their day to day life. In Clinton’s book ‘What Happened’, she explores the reasons why she chooses to wear pantsuits: they make her feel professional, they allow her to fit in amongst her fellow male politicians, the suit contributes to her anti-distraction technique and, lastly, allow her to not ‘overthink’. We can conclude from this that the trouser suit empowers different aspects of femininity: the body, the mind and the workplace.

Rewriting the Rules through Fashion

Defying paradigms of gender through this fashion piece is not restricted to political atmospheres, as it transcends into different aspects of culture. The Kenyan-born American activist, model and designer Halima Aden perfectly demonstrates this through incorporating the trouser suit in her successful attempts to diversify the beauty industry. During New York Fashion week, at the Messika x Gigi Hadid party, Halima wore an elegant but professional black trouser suit in combination to her signature hijab which presented her as both editorial and powerful as she contributes to the fight to defy oppressive feminine guidelines that once limited women in the fashion industry. It is exactly role models such as Halima who we need to support; who take risks with their fashion choices for the benefit of those who feel underrepresented and intimidated by repressive cultural norms. At such a young age of 22, Halima ultimately uses her trouser suit ensemble as a tool to attract attention to her powerful qualities as an educated, charitable and beautiful woman.

The Perfect Balance of Power And Beauty

It speaks volumes to transform the historical trouser suit into a feminine power suit. Nora Lum, best known as Awkwafina, is an Asian American actress, comedian, writer, producer and rapper who wore a stylish trouser suit when attending the 2019 Oscars. Her suit (see image 4) was head-to-toe pink and encompassed the mighty stamp that women have left on previous masculine garments. With a pussycat bow, plenty of sparkles and a matching purse, Awkwafina established the perfect balance in oozing assertiveness and professionality whilst also expressing her confident, sexy and feminine side.

Through looking at contemporary female leaders who contribute in setting the path for change and controversy, we can educate ourselves on the powerful impact that fashion can leave in society. It is of value to take inspiration from these extraordinary women, and heed the messages that trouser suits and similar ‘rule-breaking' styles represent. The political and cultural impact of fashion transcends into our everyday life, where simple wardrobe investments can say more than what initially meets the eye.

As a collective, may we set the path for empowering females through fashion.

This is the first article of a series that explores what It means as a woman to wear clothing outside of the societal norm, as we explore the history of such pressures within society and how fashion is evolving to break the mould.

Olga Anderson is a bespoke and ready-to-wear womenswear designer. She specialises in clothing designed to empower her clients, and as of 2019, became a ‘Women Appreciating Women’ (WAW) Honorary Award winner. She runs her brand with the belief that “fashion and design should empower women”; working meticulously to encourage and celebrate women’s individuality, accomplishments and passion, both in and outside of their careers.