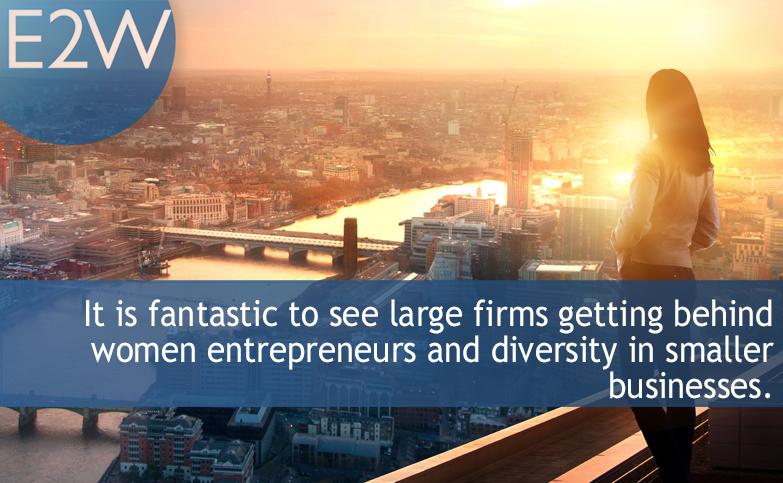 It is great to see large firms getting behind women entrepreneurs and diversity in smaller businesses.

It is fantastic to see large firms getting behind women entrepreneurs and diversity in smaller businesses.

Rose will aim to support the creation of 50,000 startups by 2023 by inspiring half a million people to consider starting a business, of whom at least 60 per cent will be women.

Before becoming the bank’s first female boss, Rose led a government-backed review which found that the single biggest barrier facing female entrepreneurs is a lack of funding.

“Building a business is often tough and lonely and can be harder than it needs to be,” Rose said.

The Rose Review found that women launch businesses with 53 per cent less capital on average than men and are less aware of funding options.

She added: “By tackling the most important issues facing our entrepreneurs, we can make a real difference to those who need it most, especially in female-led businesses.”

Simon Clarke, exchequer secretary to the Treasury, said it is “shocking” that only a third of entrepreneurs are women.

He added: “This £1bn of funding is a tremendous step forward and demonstrates the finance sector’s commitment to promote female entrepreneurship in the United Kingdom.”

She said: “RBS is offering a real boost for the country’s female entrepreneurs and for the whole British business community. Their new investment supports our ambition to make the UK the best place in the world to work and to grow a business.”

On other fronts, Goldman Sachs have announced they won’t take companies public unless the company has at least one “diverse” board member, with a particular focus on women.

“Starting on July 1 in the U.S. and Europe, we’re not going to take a company public unless there’s at least one diverse board candidate, with a focus on women,” Solomon told CNBC from the World Economic Forum. He added, “And we’re going to move towards 2021 requesting two.”

Does Diversity Translate To Profitability?

Solomon suggested that one rationale for Goldman’s new policy was to “drive premium returns for their shareholders,” and told CNBC that in the last four years, “the performance of IPOs where there has been a woman on the board in the U.S. is significantly better than the IPOs where there hasn’t been a woman on the board.” The actual numbers are striking. Companies with one diverse board member saw a 44% jump in their average share price within a year of going public, while those with no diverse board members saw only a 13% increase in share price.

Alice Eagly, professor of psychology and management at Northwestern and expert on female leaders, delved into the academic research on the impact of adding women to corporate boards. She found when you removed all of the confounding variables, diversity had no effect on profitability.

The real reason we should want diverse corporate boards is that all-male and all-white boards are a huge red flag for bias. With the diverse pool of talent available, the likelihood that an organization completed an unbiased search process and still randomly ended up with an all-male and all-white board is almost zero. In other words, if the corporate board is all male and all white, there is likely bias somewhere in the appointment process. Corporate responsibility is what is at stake here, not necessarily corporate profits.

Number Of Women On Corporate Boards Increasing Over Time

Goldman is not alone in the push for more women on corporate boards. California currently has a law requiring publicly traded companies to have at least one woman on their boards. By 2021, boards with five members must have two women, and those with six directors must have three women. Similar proposals have been introduced in Illinois, Massachusetts, New Jersey and Washington state.

Research from executive search firm Heidrick & Struggles indicates that board diversity is at an all-time high, and the number of women on corporate boards in Fortune 500 companies has been increasing significantly over the last ten years. In 2009, 18% of appointments went to women, and by 2018 the figure had more than doubled to 40%. However, the total share of seats held by women on Fortune 500 boards in 2018 was still only 22.5%.

Goldman is setting an example with its own corporate board, as four out of its 11 directors are women and its lead director, Adebayo Ogunlesi, is black. The company also seeks diversity lower in the ranks and announced hiring initiatives last year that target women for half of all new analyst and entry-level associate positions. They also set goals that 11% of these hires would be black and 14% would be Latino.

It’s not clear whether Goldman will have to turn away much business due to their new policy. The CEO suggested that Goldman could tap its own network should a client be in search of a diverse board member. But Goldman is highlighting the importance of diversity and holding those companies without diverse boards accountable. That’s how change happens.

If you found this article interesting and would like to continue the conversation with me, please get in touch.