Here at E2W we’re starting to get excited but about the fast approaching gender pay gap reporting deadline in April 2019. Firms will be reporting on their gender pay gaps at 5th April 2018   Of course, some firms have reported already: Aldermore Bank, the various entities under the HSBC umbrella, Sumitomo Mitusi and Virgin Money were among the first to report.

We are proposing this year to focus our attention on the percentage of women in top quartile earners. Pay quartiles are a mandatory gender pay gap reporting element and are calculated by splitting all employees in an organisation into four even groups according to their level of pay. Looking at the proportion of women in each quartile gives an indication of women's representation at different levels of the organisation.

If we scrutinise the proportion of women in senior roles / the top quartile of earners it gives a real indication of how  women are succeeding in the firm.  As we now have two years’ worth of gender pay gap data, we can also see how each firm / entity are progressing and estimate when they will reach 50/50 gender parity at senior levels.

Here are our predictions: 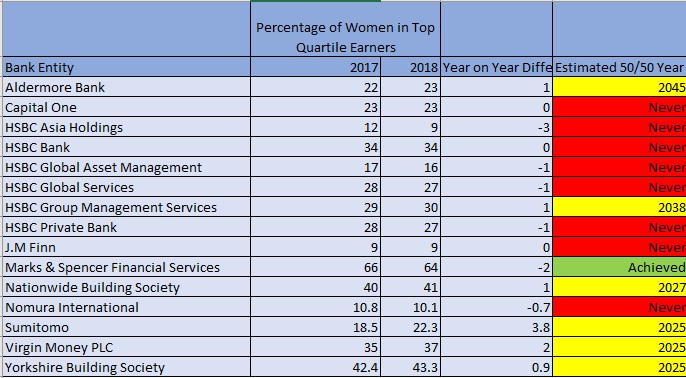 Continued praise should go to M&S (HSBC) who although their figures have dropped backwards remain in the unique group of banks that have more women than men in top quartile earners.

Sumitomo have made significant progress with a massive 3.8 percentage points increase in female top quartile earners; at that pace they will be 50/50 by 2025, along with Virgin Money and Yorkshire Building Society.   HSBC Group management services will follow them 13 years later in 2038 and Aldermore  at its current rate of appointing women into senior positions will join them in about 2045.  Whilst the latter figures are not great we should praise these firms for the positive progress they are making. Capital One, J.M Finn along with HSBC Bank have made no progress at all in the year.

The remainder of HSBC and Nomura are actually employing fewer female top quartile earners this year than last – I hope that is not repeated.