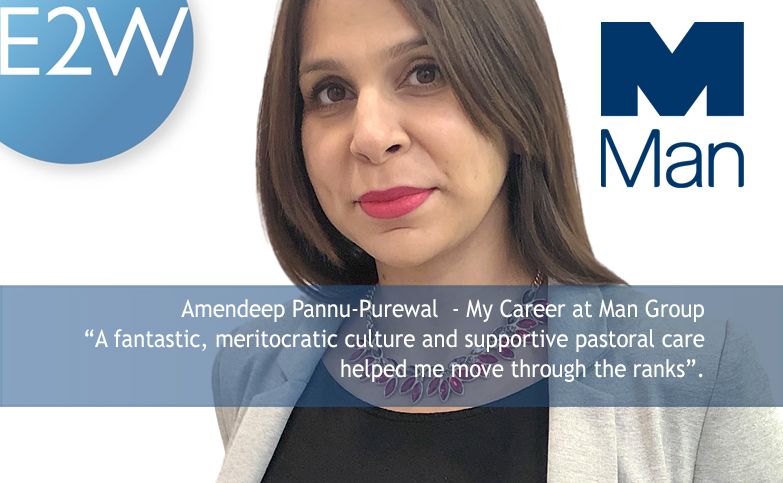 In autumn of 2018, E2W were approached by Man Group to partner with them in their Active Inclusion Recruitment Strategy.  As part of their diversity strategy they needed specialist help to find female candidates for open roles. As part of our due diligence we, as usual, asked two simple questions and asked for compelling evidence in their response.  The two questions were:

As part of their response Man Group gave us time to meet some of their team.  Amendeep told us her story which is reprinted here for you. If you are interested in Careers at Man Group please contact Robyn Clarke.

Amendeep Pannu-Purewal  - My Career at Man Group
“A fantastic, meritocratic culture and supportive pastoral care helped me move through the ranks”.

I’ve been at Man Group for nearly 18 years and people call me a ‘lifer’. I don’t mind that though, I enjoy working here - “if it isn’t broken, why fix it?” and this organisation has been incredibly supportive to me over the years both professionally and personally.

I started as a financial engineer in 2001, dealing with portfolio construction and the financial modelling of funds. I then moved through the ranks at Man Group, as my role quickly evolved into working closely with the Investment Committee at the time, and I was soon responsible for running the portfolio implementation and rebalance processes for the multi-manager business. Over time, I began to work closely with the then Chief Operating Officer and heads of department to refine business processes and governance.  In late 2009, after much change at Man Group, I was approached to move into Group Risk and became a Group Operational Risk Manager, working closely with the Chief Risk Officer, Chief Financial Officer (CFO), General Counsel and other C-suite managers as I became Secretary to the executive Risk and Finance Committee. More recently, I have been promoted to Head of Group Operational Risk.

I say ‘moved through the ranks’ but in actual fact, Man Group has a relatively flat structure and isn’t too concerned with job titles and seniority. It’s definitely a meritocracy and I’d like to think that’s how I’ve achieved success in my career. I work hard and I’m conscientious, I take the initiative and I’m good at managing people all of which my managers have recognised. As a result, I’ve had plenty of new challenges and opportunities come my way.

Over the years at Man Group, I have made great friends and enjoyed being part of a hardworking, collaborative and supportive culture. In 2009, as well as changing my role, I got married and moved homes and then, in late 2010, I found out that I was pregnant. It’s over the last nine years that Man Group’s ‘pastoral care’ and fantastic culture has really demonstrated its strength to me.

I have to admit that up until my own pregnancy, I didn’t really know or understand the ins and outs of maternity leave – how was it going to work? I was excited and nervous like most expectant mums-to-be but also adamant that I’d be coming back. I loved my job and actually rarely took much time off. I told my manager at the time I’d be back after six months to which he said, “I’ll put down twelve months but you can come back after six if you like – we’ll be flexible.” 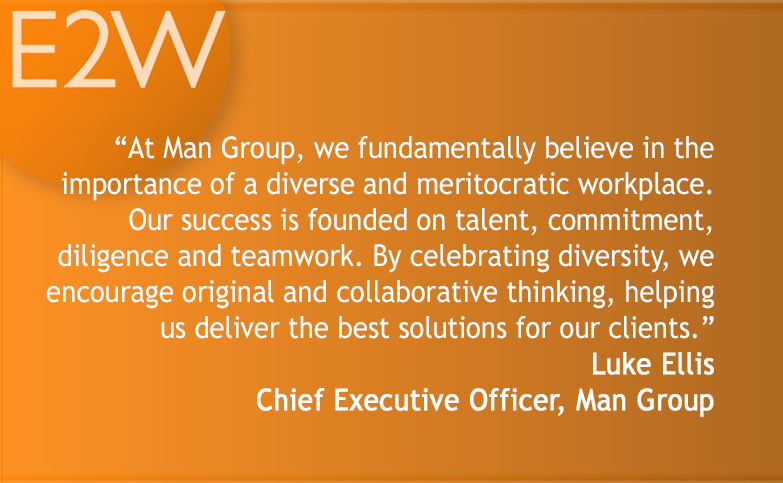 After my first son, I used my Keeping In Touch (KIT) days and came into the office about once a month. During month eight of my maternity leave (you see, I didn’t return after 6!), Man Group approached me about a programme of work to enhance the risk framework, which was due to be rolled out across the firm for which they needed second line risk support. They were very careful about their enquiry, not wanting me to feel pressured to return but also keen to include me. It sounded like a great opportunity and I came in to speak to the CFO at the time. Having been away from the office for some time I had convinced myself that my meeting with the CFO was an interview to see if I was suitable for the position but I couldn’t have been further from the truth! In actual fact, he wanted to understand how I was feeling about returning. I, however, even turned up with my updated CV in hand but the conversation basically went along the lines of:

To which he told me an anecdote about his own family. It really made me reconsider my plans and I will always be very grateful for that personal and honest advice. He suggested I return for 2/3 days a week, use the fact that my maternity cover was still in place and ease myself back in gently. And that was fantastic advice.

I returned in the March and reached full-time in the June.

2015 was a difficult year but Man Group helped me through it again. Two days after my second son was born in January 2015, I faced the most heart-breaking news: my brother who had been in intensive care for the last month was unlikely to pull through and he died the next day. Man handled it really sympathetically, keeping their distance but letting me know that they and the counselling services they had access to, were there for me as and when I needed them. When it came to returning from maternity leave, from experience and from their actions, I knew I had the support of my management – I used a combination of my KIT days again and accrued leave to ease myself back in to the working world.

These days, I try to help those more junior to me grapple with maternity leave and the subsequent return to work several months later. Mothers’ working days look different – they may have to leave earlier and log on later; they may want to work from home more; they may need reminders on technical issues at work when they first return.

This is all fine. I’ve learnt that the biggest battle is with yourself: that feeling of being judged when you leave early even when no one notices; always wanting to be successful; wanting to be present; and wanting to do your job to the best of your ability.

And now I’m about to go on maternity leave again. As Head of Group Operational Risk, I feel so much wiser about how to handle my maternity cover and maternity leave. I know what I need from someone doing my job whilst I’m away which makes the recruitment process both easier, and harder!  I will say that I’ll be off for the twelve months but if past performance is anything to go by, I may return sooner.  But when I do, I’ll ease myself back in rather than returning full time immediately knowing that I have the support of Man Group, my managers and colleagues, and that my career can continue to flourish.

This is the first in a series of stories to run alongside our Inspirational Women series , showcasing the amazing women who are supported, developed and encouraged in their careers by our clients (and E2W).  If you would like to share a story or become an E2W client please contact Mark Freed