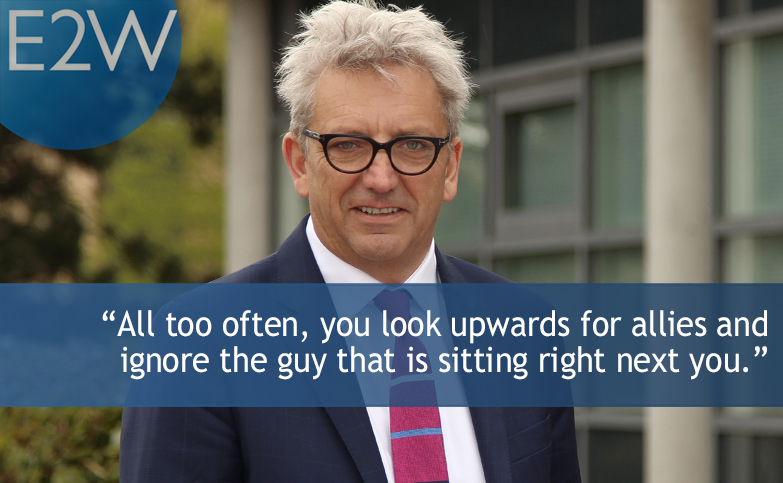 “All too often, you look upwards for allies and ignore the guy that is sitting right next you.”

I am delighted to have been invited to speak at Personal Investment Management & Financial Advice Association (PIMFA) Women in Wealth Forum on 8th October 2019. I have been asked to speak on the subject of Male Allies, a subject that fills me with mixed emotions and fears.

I see so many men standing up at these types of events. Are they being genuine? Do they come over as patronising? Are they there to tick a box or because in this day and age it’s the thing to do?

How do I ensure that my genuine interest and commitment to equality and choice for all really comes across. How do I get my important messages across. Imposter syndrome kicks in really early.

I have spent the last 20 years of my life building a business, with my wife, that just last year helped over 800 women make positive progress towards their financial services career aspirations, I am all too aware of the injustices and the challenges that women face every day.

Is the human instinct to think that is wrong and I am going to help? Or is it that it’s wrong but I’m safe, I’m comfortable and there is less competition? Will #heforshe ever work?

In the corporate world and much of the rest of society men are in a position of privilege. Tell that to the guy sitting next you in the office whose just become a father again, who missed his other child’s first school play, who is wanting to move up the housing ladder to a neighbourhood with good schools. Who did not go to the right school/university himself and who speaks with the wrong accent.

My point is that most men in the corporate world don’t feel or understand their privilege. Most of them share many, not all I grant, of the same challenges you face – be that a glass ceiling, a feeling of being under appreciated and a lack of work life balance.

Society norms and pressures are changing, more needs to be done, but the way you are treated in the office and wider world have seen significant advances. We are no longer living in a world where the male behaviours towards women of previous centuries are acceptable. Everyone needs to stand up and stamp out what remains. Let’s do it together.

Someone once said that Diversity was being invited to the dance, Inclusivity was being asked to dance. Well if the DJ refuses to play ‘our tunes’ then we should make our dance partners the allies not the DJ.

Women are woefully unrepresented at senior levels in the industry. The fact is that the figures are, in many firms, actually getting worse and in most, not moving at all. This, despite the rhetoric, shows that although our leaders are promising to play our tunes, our records, but our requests are so far down the play list its unlikely they will played in the near future.

The evidence shows that diverse and inclusive firms perform better. In the wealth sector women are also increasingly the customer. So why arn't so many of our leaders playing our records?

How many times have you heard the line “ I’m an ally – I mentor a couple of junior women” – that is not being an ally. Being an ally, if you are in a position of power, of privilege, is ensuring that every women in your organisation is respected, is understood, is appreciated. It is, that she can leave work every day feeling that she has been able to make a positive contribution and that she can achieve her ambitions without hinder or bias. It is ensuring that your firms working practices allow her to do that.

All too often, you look upwards for allies and ignore the guy that is sitting right next you. If you are going to engage him, you probably also need to change the call to action.  Why should he care? What’s in it for him? I would suggest not #heforshe

Let’s tell him a few facts:

Since then society has changed considerably. Equality has given men the freedom to climb the corporate ladder regardless of social or economic background. Men are no longer constrained to following their father’s footsteps. Equality has given men the freedom to follow their dreams – but more still needs to be done. Let’s do it together, not forgetting about those from other diverse groups, they need our help as well.

I was probably one of the first generations to be allowed in the delivery room when the mother of my children was in labour. My boss gave me the afternoon off work and allowed me to book some annual with a level of flexibility.

Men are increasingly playing a hands on role in parenting and are loving it and proving to be good at it. Stay at home dads and latte dads, are all becoming accepted. Employers and employment law is changing to make it easier for men. My mother’s employment contract in the 1950’s contained a clause called the marriage bar, it was the norm in those days and meant her employment contract ended the day she got married. Women campaigned to get that made illegal and then campaigned for maternity leave. Paternity leave followed shortly afterwards -  but more still needs to be done. I asked a number of twenty/thirty year old man in the industry if they thought it would be easier and less harmful to their career to come out as being gay or asking for paternity leave – most answered to come out. Let’s do it together.

These are just two examples of how women have campaigned for change and the guy sitting next you has benefitted. There are plenty more.

Given the choice of going back to the working practices, society and cultures of last century, most men will agree we need to move forward, most will agree that the changes that have happened are beneficial to them, you and society as a whole.

Let’s engage the guy sitting next you – not because you are weak and need help and support but because it benefits everyone in society. Let’s do it together. Let’s take those final steps towards a society that gives us all the right to choose our own paths, our own destiny. Where we can reach our potential on merit.

If you would like to contribute to our blog by sharing your thoughts on topics or your career story please contact Katie.