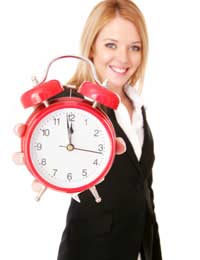 A fifth of mothers are forced to quit their job after flexible working request is rejected, research

One in five working mums have been forced to leave their jobs after their request to work flexibly was rejected, according to research.

The survey with more than 2,300 working mothers revealed that 38 per cent of respondents still on maternity leave would not return to their jobs if flexible working wasn’t granted and 47 per cent were unsure what they would do.

However, despite the importance of securing flexible working, 46 per cent of women still on maternity leave had not discussed it with their manager yet.

Results showed that 58 per cent said it was the most important factor for their career progression, up from 52 per cent in 2014, confirming the importance of this flexible option for women with children.

The right to request flexible working was extended to all employees last year but the policy has a less rigid timetable for employers and no statutory right to appeal if a request is turned down.

Yet of the women whose requests were rejected more than half said they felt the reasons given were unjustified and 13 per cent who appealed were successful. But the majority of women, 77 per cent, didn’t appeal.

Why should employers approve more requests?

It makes business sense: When the recent survey was conducted, it is apparent the impact of refusing flexible working requests is a real business issue as organisations are losing talent. They are losing people they’ve spent time and money training, people with knowledge about the business. On top of that these women want to work, there’s a real appetite among mums to continue working.

Flexible working is not always about going part-time. It can be about working more flexibly than the typical nine to five office hours.

There is no longer a statutory right to appeal a flexible working decision, which can open employers up to an employment tribunal claim when a request is rejected. The government recommends using the tribunal process when a women feels they have been discriminated against, something that is more likely when an individual feels the refusal was unjustified.

Ensure everyone has the right information

Legislation requires employees to show that they have thought about the effect that their changing working patterns might have on the business.

By raising awareness among employees and managers about their rights on requesting flexible working it will ensure requests are being dealt with appropriately. Acas has information about employee rights, as wells as gov.uk.

E2W A certified women owned and run financial services consultancy, devotes significant resources to promoting gender diversity and in particular the challenges faced by women who have left the city when they were ‘excluded’ from financial institutions because these firms could not offer true work-life integration. E2W created an environment that enables this extraordinary resource to become productive once more and recognised that it was time to offer an alternative approach to prevent the current talent and investment drain.

Formed in recognition that flexible working arrangements provide the framework to support a healthy work-life balance, E2W have built on this framework and as a result, attract high calibre employees who want to work flexibly, but still excel within a challenging and rewarding career.

A team member says “We work with a large number of employers who embrace the benefits of flexible working,”

E2W support employees and employers both domestically, regionally and globally and their client base is growing from strength to strength.