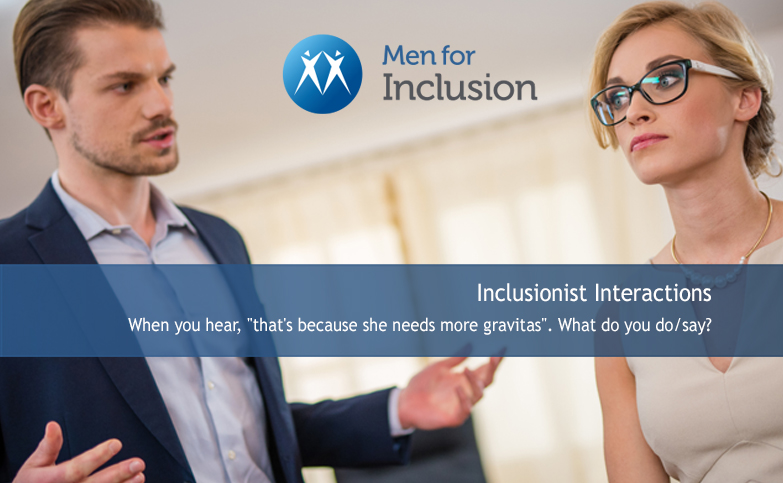 Inclusionist Interactions: When you hear, “she needs more gravitas” what do you say?

When you hear, “she needs more gravitas” what do you say?

Maybe she does need to show more gravitas to be promoted or put on the team for a high-profile assignment. However, we suggest you stop and consider whether the person using this word is making a stereotypical judgement about a female colleague who has a different way of communicating to her male colleagues.

Research tells us that women are typically given less direct and actionable feedback than men. By men and women. The reasons behind this are often well-intentioned, or examples of accidental sexism underpinned by unconscious bias about ways in which women present themselves differently to men. Many women will recognise that two things they hear far too frequently are about her need to show more ‘gravitas’ or confidence’.  When the person making these judgements is questioned, what often emerges is that a judgement is being made about having smaller stature and/or a quieter voice than a man. Taking up less space. Or lack of gravitas being equated with a communication style than is more questioning than assertive. Pointing out these qualities is not necessarily unreasonable, but the problem comes if the speaker is not also thinking about how much impact the woman has, and how well she matches clients or colleagues who appreciate her style of communicating. Or not considering the benefit of a range of different styles. Or even if what is behind the comment is that she ‘should’ act more like the person saying she lacks gravitas or confidence.

That’s why it’s worth asking the speaker what they mean by gravitas (or confidence) and how they think the woman in question can show more of it.  Of course, it’s not only women who are described as needing to show more gravitas or confidence.

We’ve picked up on this example as a way of highlighting what an ally can do when assessments are made in passing or in a formal review. This act of inclusion, whether the person being described is in the room or not, can help combat accidental sexism and build a more inclusive culture in your team.

For more discussion with peers about stereotypical judgements and tips about how you can call this out, join us on Tuesday 20th April at 6.00 – 6.45 pm