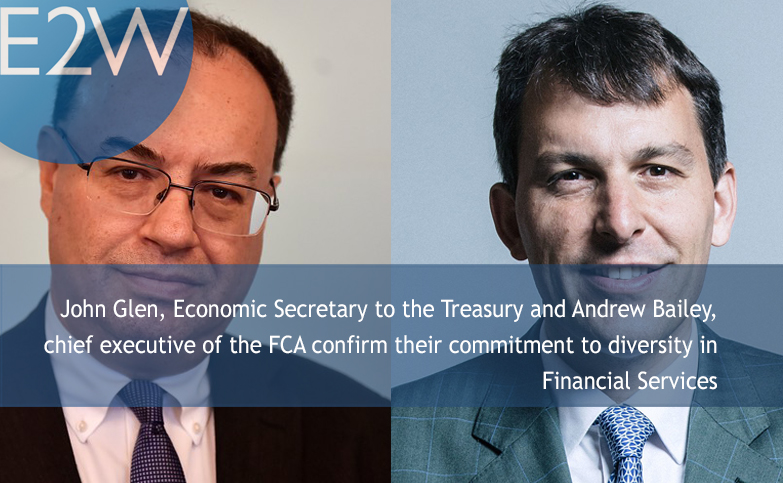 Back in November, I wrote a piece about the fact that in order for us to achieve gender parity, we need more men to be involved. Gender parity means just that – women and men on an equal footing and although women are fighting the good fight, the cause needs men to be on board too.

Recently, I was delighted to read the speeches of two high profile men who were shining a spotlight on gender diversity. Their words are encouraging us all to take responsibility and action for making the changes to society and workplace culture, and I don’t think that they’re just paying the topic ‘lip service’ - they acknowledge that their own departments have work to do too.  It was refreshing to read about the progress they have made but also their ambition to solve this issue once and for all.

Both John Glen, Economic Secretary to the Treasury and City Minister and Andrew Bailey, chief executive of the FCA were speaking at PIMFA’s Wealth of Diversity conference. John Glen explained why diversity is important, not just to benefit the bottom line but also to benefit society.

“We need an inclusive workforce for many reasons – and ethics is but one of those reasons. It is simply the right thing to do and to expect. And it is a hallmark of a civilised society. Ethics aside, there is more than anything, a strong commercial case for real diversity.  Diversity of thought leads to better outcomes, a happier workforce, reflects shareholder values and is increasingly attractive to investors. A report by the CBI in 2016 concluded that diverse workplaces generate innovation and greater employee engagement.”

And society is a big player in Andrew Bailey’s speech too, as is an organisation’s culture. Interestingly, regulators care about companies’ governance and culture – if both are healthy then misconduct is less likely – and although he admits that there isn’t a ‘one size fits all’ for culture, there are some common denominators in his opinion, diversity being one of them.

“Diversity is a core part of how we look at the culture in a firm … Fostering an inclusive and diverse culture can contribute to changing the behaviour of firms for the better. As shorthand, I always say that I don’t want to work in a place that is full of people like me … Diversity and inclusion help to mitigate the risk of groupthink, and I believe they provide an opportunity for competitive advantage to organisations by helping them to make better decisions and to think in the long-term.”

Both Glen and Bailey disclosed the progress that their organisations are making against their targets. At Glen’s government department, HM Treasury they look set to hit their targets of 50/50 women in the senior civil service by 2020: the percentage has risen from 43% in 2017 to 48.2% in 2019.

At the FCA, they too are moving in the right direction: 39% of their senior leaders are women, and they have targets to reach 45% by 2020 and 50% by 2025. It will be interesting to see their Gender Pay Gap data.

What’s interesting is that, like Nicky Morgan MP in our January round table discussion with her, Bailey acknowledges that change has to be deliberate, it won’t just happen on its own, something that we at E2W strongly endorse.

“I have to say that a decade ago I was not wholly convinced that targets were the right approach – surely a good organisation should get there anyway. But, through experience, I have come to realise that targets do play an important role – they focus the mind and the actions.”

Glen is a strong proponent of the Women in Finance Charter and in the speech, discussed its success and the fact that it has gained such traction – not only is it having an impact on the UK financial services’ industry but also in foreign jurisdictions such as Brazil and China. He wants to see more though:

“I want to see firms taking this seriously and taking meaningful action, so we see a real shift towards gender parity.”

Glen wants ambitious targets, focus and “evidence based interventions” whereby companies learn from each other and implement best practice – E2W’s modus operandi every day. We are experts in gender diversity recruitment and senior women retention best practice and we have a thorough understanding of the financial services’ industry. Glen stated in his speech that he doesn’t want to be talking about this subject in five years’ time and ideally, as strange as it sounds, neither do we!  Like Glen we want gender parity to be a social norm.

I’d like to finish with a great line from Bailey’s speech which epitomises how diversity should be perceived.

“As I said at the start, since we all serve the society in which we exist – we all need that social licence – we are more likely to succeed if we look more like that society.”

If you are keen to address gender diversity within your organisation then please contact me, Mark Freed.