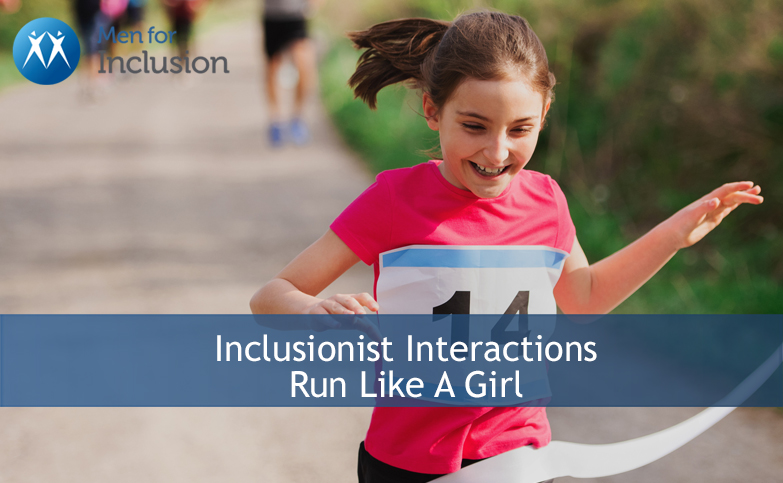 Come and join other Men for Inclusion 'Inclusionists' for our fortnightly virtual chat and discussion. We are welcoming members and non-members to join.

This week we will be discussing if we still need to redefine what it means to “run like a girl”?

Commissioned by Always in 2014 to investigate our negative connotations with the expression, the director Lauren Greenfield, who brought audiences 2012's Queen of Versailles, produced an ad campaign that has sparked a national conversation eight years ago on female empowerment and self-esteem.

The campaign finds Greenfield on set and asking men, women, and boys to act out running, fighting, and hitting "like a girl." The caricatured responses reinforce a stereotype that says girls are weaker and less determined than boys are.

When Greenfield prompts young girls to demonstrate the same actions, reactions are breathtaking.

"One of the things that Always was interested in looking into is how girls deal with the confidence crisis that happens around puberty. Everyone knows that 'crying like a girl' or 'running like a girl' isn't a compliment, but no one takes the off-the-cuff remark too seriously or considers its damage," she said.

Reflecting on the emotional impact the video has had on men and women across the country, Greenfield emphasized her own reaction to the video.

"We had no idea what people would do when asked these questions," Greenfield said. "It was amazing and moving and surprising to hear their responses. ...It made us realize how deep and ingrained the stereotypes were, but also people's desire to change them. Consciousness about what we take for granted is the first step to change and I hope this spotlight on what is thought of as a trivial remark will create a more empowering conversation for the next generation."

"'Like a Girl' should never be used as an insult," Greenfield said. "It means being strong, talented and downright amazing."