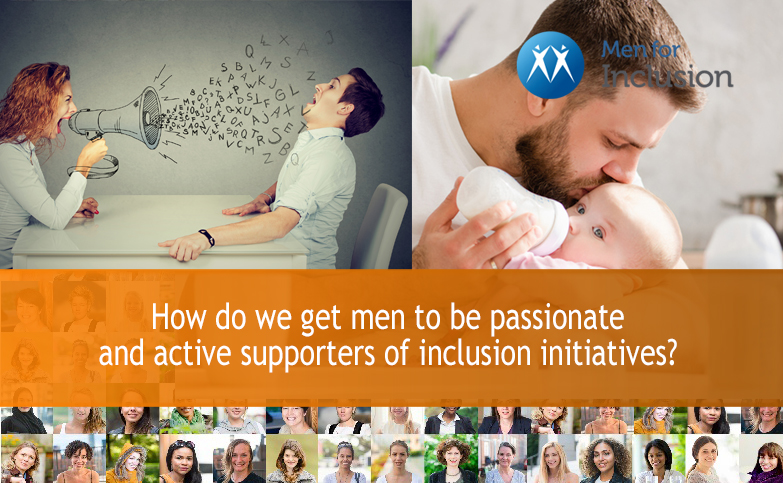 How do we go about getting the majority, usually straight white men, in our workplaces to be passionate and active supporters of inclusion initiatives?

Come and join other Men for Inclusion 'Inclusionists' for our bi-weekly virtual chat and discussion. We are welcoming members and non-members to join. For this week’s Inclusionist Interactions series we will be discussing how we go about getting the majority, usually straight white men, in our workplaces to be passionate and active supporters of inclusion initiatives?

Do we shame them with stories and facts about their male privilege , their biases, their aggressive behaviour, poor values and constant errors.  Do we remonstrate about the poor and unfair culture, workplaces, society that they have created and help to sustain.

Be role modelling and selling the personal advantages to everyone, including straight white men, of a more inclusive world, society, workplace and home?

We are moving from a very simple, rule based society where everyone had a place, a predefined role and largely complied with the unwritten and written rules. This  society limited everyone to conforming to gender, socio-economic, ethnic & regional and religious stereotypes and made laws that restricted our behaviours.

As society has changed the old rules and laws have been thrown away giving us all the opportunity to write our own. We are being released from the straightjacket of complying with outdated stereotypes and barriers are being taken down. But that creates its own problems. When traditional comes up against modern problems can occur. When one gender enters the others world it is often uncomfortable, strange, unfamiliar, threatening for everyone.

If we want to move forward to an inclusive society where we are known by our name and treated and respected as an individual and not defined or restricted by our genders, socio-economic backgrounds, ethnic or regional origin, religious beliefs, sexual orientation or physical / mental state then should we be using the carrot or the stick to bring those who are less engaged along with us?