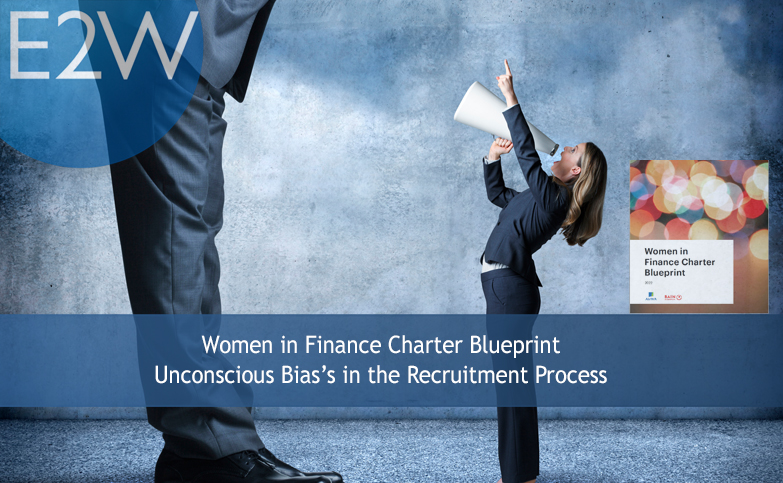 The Women in Finance Charter – Women in Finance Blueprint 2022 recognised that if the industry  are going to meet their D&I commitments, and in doing so become better more profitable and sustainable businesses, then reviewing and restructuring recruitment process for unconscious bias is a top imperative.  https://www.bain.com/insights/women-in-finance-charter-blueprint

The report does not go into any detail about what it considers to be the unconscious bias’s in the ‘process’.  As a firm that focusses all our efforts on finding female candidates for experienced and senior hires in the industry, E2W experience these process bias’s every day and are therefore in a very good position to explain them.

How often do you hear a recruiter / talent partner say we have not had any or can’t find any quality female candidates? In most cases we believe that it’s not that there are no women capable of doing the job, it is that the bias’s in the process mean that they have not been found.

The report highlights that it takes, on average, 130 days to recruit female senior managers compared to 90 days for a man.  In our experience, most of this difference is front ended at the very start of the process  i.e. attracting and sourcing candidates.  In a talent pool that is typically 20% female who are more loyal, more risk adverse and less likely to want to experience a difficult recruitment process, it is often the case that qualified female candidates are not ‘actively looking’.

Current recruitment process are well oiled machines driven by cost and time to hire. The cheapest and quickest way to find candidates is to advertise on your website and on platforms like LinkedIn. The smaller proportion of women are also less likely to be active and so do not see the advert, the process misses many potential female candidates.

With E2W’s privileged access to over 15,000 women working in Financial Services, we know that women are more likely to explore good career opportunities via introductions and friendly taps on the shoulder from people that they trust and know.  To achieve this you need access to the talent pool and the expertise to present the proposition / opportunity in a compelling way.  This all takes   more time and money than a simple advert.

Role: Senior Financial Risk Professional in Major Investment Bank UK Based, base salary £120k. Total Talent pool: 50 people, 40men 10 women.   Of the 40 men, 4 are likely to be active. Of the 10 women it is quite feasible that none are actively looking.

Week three after the role was advertised internally the talent team at the Bank put the job on the website and LinkedIn. Week four into the search the recruiter has 4 good male CV’s and no qualified females ones and the interview process is started.  The bias is built into the system.

What happens next really depends on the firm and talent team but could include doing nothing, putting forward unqualified female candidates to make targets, or embarking on the search for 10 women.   Whatever action is taken it is often too late and the men have the advantage.

Experience shows that the hire in these cases is most likely to be male.

Week three, after the role was advertised internally the talent team at the bank decided to instigate an active diversity hiring strategy and engaged with a specialist recruitment agency focussed on diverse hiring.  The agency via its network has privileged access to the 10 women in the talent pool who are all passive candidates. Armed with a great value proposition over the next two weeks the agency are able to gain 4 of the women’s interest in the role and they put themselves forward as candidates.  Week five the talent team advertise the role on the website and LinkedIn and get the 4 male candidates.

Our experience demonstrates that in over 50% of the cases one of the four women will secure the role as the best candidate for the job, team and firm.

It is harder to get your nephew on the graduate scheme than it is to get your old colleague a job.

Talent Partners and HR leaders in many firms report that in some cases over 30% of senior hires are done through referrals with little or no process.  The hiring manager has decided that his old colleague is the best / only person for the job and is able to either hire without due process or by using the process.

Our Men for Inclusion research has shown that male social bonds give men a significant relative advantage.  In this case it is demonstrated by loyalty and preference – often unconscious.

The Industry have overcome these bias’s at graduate level by putting in process and recognising that an all or predominantly male graduate intake is not good for the firm / team but have not taken the same steps at senior hires.  If we believe that DE&I is a business imperative then a straight, white male is not the best person for the job in a team of straight white males.

Role: Chief Commercial Officer – Wealth Manager.  The Executive Committee Roles were predominantly male. The female representatives on the committee were from Human Resources and Legal.  The firms recognised that given that DE&I was a business imperative,  the best person to fill the vacancy would be a candidate from a diverse background.  But did any exist?

The male ex-colleague was hired.

Unbiased Process Case Study:  The ex-colleague candidate was not progressed into the process until other searches had taken place.  At the beginning of the search and before any other activity the Wealth Manager instigated an active diversity hiring strategy and engaged with a specialist recruitment agency focussed on diverse hiring and asked them to source candidates for the role.  Over a five week period the agency were able to put forward five candidates for the opportunity, including a couple of senior women who had been on career breaks.

Once these candidates had been found and the interview process had begun the role was released to the Wealth Managers usual head hunters who added to the list with their male candidates and the ex-colleague.

One of the female candidates, who also happened to be a returner, got hired.

Employer value proposition, candidate experience / process, benefits packages and a firms / teams culture, behaviours and values all need to be considered when attracting and processing female candidates – passive or active. With a large talent pool of active (male) candidates, most firms have had the luxury of not needing to give too much thought to these in attracting active male candidates for roles.  For the reasons given in Bias No. 1, female candidates are likely to be passive as well as more  risk adverse and more loyal to their existing employer. This means firms looking to recruit females need propositions and processes that work harder and are more flexible.

Loyal and risk adverse,  passive female candidates are more likely to respond to a well thought-out approach that gives them a genuine reason to invest time in exploring the opportunity.  In addition to the actual role, they need to understand the employer value proposition, the culture, behaviours and values of the firm, hiring manager and team.  The risk for a women of moving from a great boss / team  to a misogynistic one are great.  As are the risks of moving from a culture where she can bring herself to work, perform, receive credit, be heard and progress.   Being approached by a person / firm that the women knows and trusts makes the delivery of the message persuasive.  All too often women are approached by recruiters and talent partners desperate simply to get a women to apply.

Processes are often designed for an active candidates, who are keen to comply and invest in the process. Female candidates tend to require a greater understanding of the role, its requirements, the broader environment and values of the firm whilst considering the implications of applying.

Firms can start with thinking about the application process.  Passive candidates are not likely to have a ready to go CV or want to go through the often over lengthy process of applying.  Be imaginative and flexible. Think about accepting LinkedIn profiles, organising initial informal meetings to build the relationship - be prepared to sell the role.

Communicate regularly, give feedback and agree with the candidate the process steps that work for both.  Don’t be afraid to put bespoke steps into the process that are designed to explore, discuss and overcome specific concerns.

If firms are serious about gender equality and meeting their commitments, then they need to think seriously about the way they recruit at experienced and senior levels.  The solutions above are not radical, they are obvious and simple.  Firms need to start implementing them.